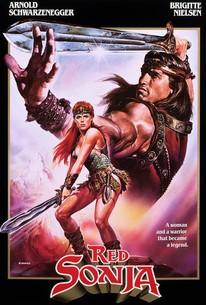 Red Sonja is unwavering in her quest to avenge the murder of her family and wrestle an all-powerful, sacred talisman from the evil Queen Gedren.

Tad Horino
as Swordmaster
View All

None of this would matter if Red Sonja was the least bit exciting, or sexy, or even funny. Instead, it`s lumbering, oddly prim and laughable.

The dialogue passages don't exactly play like Noel Coward, but this is a movie that succeeds rousingly well on its own humble, Saturday-night terms.

Red Sonja returns to those olden days when women were women and the menfolk stood around with funny hats on until called forth to be whacked at.

Worst of all, there's a charmless brat prince for Sonja to take under her wing.

Mr. Fleischer brings absolutely no playfulness to what might, at least, have been enjoyably light. And he brings out the worst in a cast that was ill-chosen to begin with.

The scene where Nielsen stands at the molten river border of the 'land of eternal night' looks particularly good.

This is a sword-and-sorcery adventure for those who like their action fast and furious, their dialogue ropey and their acting filled with more ham than a butcher's shop.

If you are rapt by swollen muscles, heaving bosoms, swordplay and a tirade of hammy, fantasy claptrap, the woefulness of this film won't put you off.

The title sounds as if this movie is about a communist spy, or maybe a new flower. No such luck.

The film is at least as good as Conan the Destroyer. Which is faint praise, indeed.

Sure, there are a few funny moments here and there with several obviously intended jokes, but director Richard Fleischer never milks the elements of self-parody for what they're worth.

The third film in the Conan trilogy...well it pretty much was wasn't it. This film is directed by Richard Fleischer who also directed 'Conan the Destroyer', the same studio, Dino De Laurentiis Company, made all three films, Sandahl Bergman was in this film and 'Conan the Barbarian' and of course Arnie starred in all three. I mean lets be honest here, Arnie plays Lord Kalidor, the character is virtually a Conan clone, I dunno why they didn't just make him Conan and be done with it. I believe Sonja comes from the Conan universe originally (I may be wrong) so why not? I'm guessing there may have been copyright issues somewhere. So its the same story again for this fantasy adventure, need I describe the plot? A small band of goodies up against an evil baddie leader and all her baddie warriors who are all holed up in an intimidating fortress. Arnie rides around in his rather unattractive red sparkly jumpsuit (changes to a black number out of the blue half way through) whilst Nielsen sports a long red mullet cut, but she's still cute. This is suppose to be the weakest of the Arnie broadsword adventures but personally I don't see it. Its no worse than the other two and gives you just as much visual sorcery. In fact there's more fantasy stuff going on here than 'CtB', giant pet spiders, giant skeleton bridges, a metallic sea monster thingy and a silly 'Flash Gordon' style baddie wizard. This film boarders more on other films such as 'Krull' and a bit of 'Willow' in my opinion. Reasonable amounts of blood and limb chopping but not overkill. Everything looks a bit tacky later on in the film but again no worse than the other two films. Unfortunately there is an annoying kid in this film, kinda like Data from 'The Goonies' or Short Round from 'Temple of Doom' (same kid actor there), tends to give the film a more slapstick approach at times, 'Conan the Barbarian' was always the most grown up of the three. At this point I reckon Arnie was possibly getting worried he may end up typecast as a barbarian meathead in fantasy films. I can see why this was his last as all three of these films are very similar and not overly wonderful frankly. Still the musical score was always in good hands with Morricone at the helm, how did they manage that? As a kid I loved these films, nowadays the rose tinted shades can't quite save them, amusing and naff, oh and the baddie Queen is a lesbian. Oh yeah, the whole story is down to Sonja simply rejecting her advances at the start, fancy that.

Fantastic fantasy adventure movie, I loved it! Nielsen may not be the greatest actress ever on screen, but she is Sonja, she just is. All the characters around her are lovable and courageous. This movie is more than just swordplay and horses, it's got romance, comedy, and beautiful sets too. Very enjoyable film.

Terrible flick, but fun to watch and snicker at.

It's sad to find out that this movie came out as late as 1985. Other films of superior quality such as Willow had already come out, leaving this movie to look like it came from the 70's. Still, pretty cool sets for sure. The story was pretty shallow and it mostly dribbles down to a bunch of sword fights (yawn). And that Asian kid was even more annoying than Shortround.