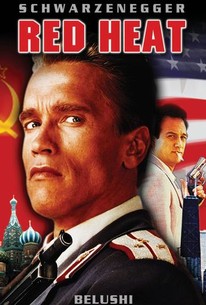 Arnold Schwarzenegger plays a taciturn law-enforcement officer from Russia. James Belushi co-stars as a wise-lipped Chicago cop. Though they go together like caviar and White Castles, they are forced to team up to collar the Soviet Union's most notorious drug lord. Thus does director Walter Hill recycle his 48 Hours formula for another unlikely star team. Unfortunately, Red Heat isn't half as enjoyable as the earlier film, owing to a lack of rapport between the two leading men and an overall lack of inspiration infecting the whole project. The one notable aspect of Red Heat is that it was the first commercial American film to stage scenes in Moscow's Red Square. Watch for Laurence Fishburne (still billed as "Larry") in a secondary role.

Christopher Mankiewicz
as Cop in Hospital

Schwarzenegger, who when he dons a green suit is dubbed 'Gumby' by Belushi, is right on target with his characterization of the iron-willed soldier, and Belushi proves a quicksilver foil.

''Red Heat'' is a topically entertaining variation on the sort of action-adventure nonsense that plays best on television.

If you still pine for the 80s where East vs West dominated action films, then this is an essential part of your education.

Right off the assembly line.

"Red Heat" is not the first movie about a couple of very different cops, and it will not be the last, but as the formula goes this is a superior example.

It is fairly obvious why Schwarzenegger was chosen to play the role of Danko in Red Heat.

Don't assume that Arnold is pure straight man here, though. He still gets his share of laughs, mostly based on the differences between east and west, and Belushi gets his shot at character and action.

It might never be remembered as a great film - or even as a great Schwarzenegger film - but it's a great slice of nostalgia.

...a plodding, downright generic buddy-cop thriller that's simply unable to sustain the viewer's interest for more than a few minutes at a time.

Went hotly down my throat like a shot of vodka with a donut to appease this big hunger pang I suddenly had for junk Commie things.

If you love crime action comedy drama movies, look no further, here's something for you. This movie is action packed because of Schwarzenegger and humorous because of Belushi. Their supporting cast is excellent as well, you can't ask for more from them. Not only is this film entertaining, it's heart warming, thrilling, and has some real good fight scenes. I really liked this, and I recommend watching it.

Well, it was a dud back in 1988, and lo and behold, it's still a dud. The worst part of this movie isn't that it does anything so abhorrently wrong. It's that it doesn't excel at doing anything above average. The action scenes are watchable but not exciting. The villains are bad, but uninteresting. Same thing with the cops. To me, the most interesting element is the character played by Gina Gershon. She happens to be the wife of notorious murderer Victor Rostavilli, and she's a real bargaining chip for the police, but her role is completely downplayed. Victor's deals, double crosses, plans to complete his goals all take place offscreen, so there's nothing to establish him as any real threat, especially because he's going up against the mother of all kick ass heroes: Arnold Schwarzennegger. I was sold on this movie because I heard Arnold was playing a Russian cop. Arnold speaking with a Russian accent? This I gotta see! Unfortunately, while Arnold isn't a total train wreck in his performance, he's not that exciting to watch either here. He drifts in and out of his Russian accent, and is oddly unconvincing when he speaks the language too. He has very few one liners, so anyone watching this movie for a good laugh will be disappointed. Also contributing to the dullness of this dullfest is James Belushi, who doesn't say a single funny line in the entire 105 minutes, although he has many attempts. All in all, this is a weak film. Not a horrible one. But a very mediocre one. So mediocre, you will forget about it almost as quickly as you watch it.

Red Heat is a fun, buddy cop action film with a good cast. A Russian cop teams up with a wise ass Chicago cop to capture an escaped Russian drug lord. Red Heat is a thrilling, awesome action film that is still worth watching again and again. Brilliantly directed by Walter Hill, Red Heat has enough story, comical moments and good action to keep the viewer interested. If you're a fan of Schwarzenegger, then this film will not disappoint you. Walter Hill knows how to craft a smart, and exciting action film and it shows on screen. Though this was made near the end of the cold war, this is still a fun, entertaining film to watch. Walter Hill is a terrific director and he has made yet another memorable action film after The Warriors of course. Red Heat is one of best buddy-cop action films, and personally, I much preferred Red Heat over the Lethal Weapon films. James Belushi and Arnold Schwarzenegger have great presence on screen and the film is a well plotted and crafted action film. The film is exciting and thrilling and manages to be entertaining despite its slightly dated look. What makes Red Heat work above all else is the chemistry Schwarzenegger and Belushi. Mix that with Walter Hill's skilful directing and you have a memorable, fun and exhilarating action film. Walter Hill's best film along with The Warriors and Crossroads.

Perhaps, Red Heat, is entertaining and funny that show a strange due, like Schwarzenegger and Belushi. The thing that made this movie rotten, is your silly script and poor direction.