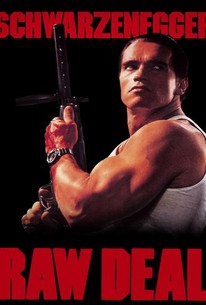 This action film stars Arnold Schwarzenegger as Kaminksi, a former FBI agent called back to duty on a special assignment. Kaminski was discharged because of his violent tactics, but when an FBI agent's son is killed by Chicago mobsters, it is decided that Kaminski is the only one who can clean out the Windy City's gangland subculture. The undercover ex-agent infiltrates a gang that's killing off anyone who is a potential witness against them in an upcoming trial. With his work cut out for him, Kaminski knocks off his adversaries in spectacular battles that make him a one-man battalion.

Leon Rippy
as Man in Tux

Cedric Guthrie
as Agent with Shannon

Socorro Santiago
as Nurse at Center

This plot is so simple that perhaps the most amazing achievement of Raw Deal is its ability to screw it up. This movie didn't just happen to be a mess; the filmmakers had to work to make it so confusing.

Must-see if only for the moment when Arnold tries to say "Molested, murdered, and mutilated"

So bad it's painful. If there wasn't a "Terminator," there would be no "Ahnuld."

Has a good enough time making fun of itself until things get flatly absurd... That's when Arnold takes his sweet montage-time securing a cache of weapons in a suitcase with all the right velcro straps, and then kills everyone with unflappable machine gun skills, shooting one-handed from a convertible. (Every mob guy is slower on the draw than a Quaker.) At the end, Arnold plays Bogart to Kathryn Harrold's ex-moll elegance. At the start, Irwin films a great jeep-vs-cycle chase and primes us to be scared of Victor Argo -- but I can't even remember how he left the plot. Plot? Who cares? This movie is supposed to be about action, humor and romance... In case you're wondering, Arnold stays faithful to his Darren McGavin.

This really is a horribly made movie, it probably has some of the biggest technical issue of a major motion picture. That being said, it's just a lot of fun and classic Arnold. He has so many great moments and testosterone fueled actions, proving that he one of the greatest action stars to ever live. The storyline is overdone so much and made so honest, but you can't help liking it on at least a sarcastic level.

One of Arnies weaker films I think, still cool and always good action scenes but just not that many. The whole thing just survives purely because Arnie is in it.

One of Arnie's worst films in my opinion, not very good at all.