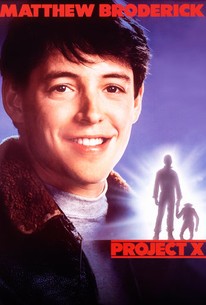 A grounded pilot discovers a secret government experiment that involves exposing a group of trained chimpanzees to obscenely high levels of radiation. This comedy-drama follows the pilot as he teams together with a kind-hearted researcher to free the animals, even though it might mean the end of his career.

Philip A. Roberson
as Reeves

Louis A. Peretz
as Bellhop

A combination of expose on Air Force experiments with chimpanzees and cuddly pet story, Project X should fly high as family entertainment.

"Project X" reflects quality and care throughout, but its elements don't quite mesh.

Plenty of strikes against this--moronic story line, obligatory animal mugging, more "awwwww" opportunities than any film since 3 Men and a Cradle--but it's still one of the most accomplished pulp fantasies in a while.

Broderick is rightly more subdued here than in some recent performances, and supporting cast is discreetly effective.

Disney-ish drama with a conscience.

The director, Jonathan Kaplan, lays on the animal antics without stint; it's a one-ring circus. The way he tugs at our sympathy for the poor smart beasts may remind you of a house pet scratching away for attention.

A likeable adventure movie with winning work from its young-ish leading man.

Broderick is superb as always and proves that he is a commanding screen presence even in the company of a cute chimp. Hunt also turns in a fine performance.

An exciting family adventure with a great turn by Broderick

...it's easy enough to suspend one's disbelief thanks primarily to the film's brisk pace and Broderick's exceedingly ingratiating performance.

Not that I'm on the side of the crazy army scientist guys in this movie or anything, but I hate movies with monkeys. This is no exception, the story is predictable, yet the actors were good, but all the while I kept hating those monkeys who were supposed to be all cute, they get on my nerves.

Save the monkeys! Pretty much exactly what you expect.

Sad movie about military medical experiment on monkeys. Stars a young Matthew Broderick and Helen Hunt who try to rescue the animals.

Oh, how this movie made me bawl! It was the first time that I realize animals were used in labs. It also jumpstarted my fear of monkeys.