The Prisoner of Zenda1979 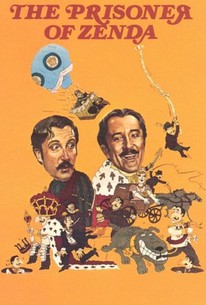 The Prisoner of Zenda Photos

The beloved novel by Anthony Hope is shown here in its sixth film adaptation. In this story, Peter Sellers is Rudolf IV, the reigning monarch of the tiny nation of Ruritania. One day, while flying in a hot air balloon, a champagne cork sends him plummeting to his death. The rightful heir, who is to be crowned Rudolf V (also Peter Sellers), is kidnapped by Duke Michael (Jeremy Kemp), who is next in line for the throne. Luckily, the good guys find Syd (Peter Sellers once again), a London taxi-driver who closely resembles the kidnapped heir. While impersonating the monarch-to-be, Syd falls in love with the prince's fiancee Princess Flavia (Lynne Frederick). Neither a box-office nor a critical success, this amiable 1979 swashbuckler nonetheless features fine performances by Peter Sellers, who died in 1980.

Elke Sommer
as Natalie, the Countess

Gregory Sierra
as The Count

Stuart Wilson
as Rupert of Hentzau

Joe Yrigoyen
as (uncredited)
View All

Critic Reviews for The Prisoner of Zenda

The movie is tailored to Peter Sellers' talents and it also develops the modern structure of the cartoon. [Full Review in Spanish]

Audience Reviews for The Prisoner of Zenda

There are no featured audience reviews yet. Click the link below to see what others say about The Prisoner of Zenda!

The Prisoner of Zenda Quotes