The Prisoner of Zenda1937 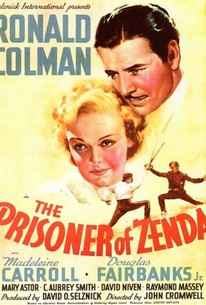 The Prisoner of Zenda Photos

Ronald Colman stars in David O. Selznick's classic production of Anthony Hope's swashbuckling adventure. The film takes place in a mythical Central European kingdom with Colman in a dual role as King Rudolf V and Rudolph Rassendyl, a visitor from England who's a distant cousin to the prince. Arriving in the city of Strelsau, the inhabitants are startled by Rudolph's resemblance to the prince. Spotted by two of the prince's aides, Captain Fritz von Tarlenheim (David Niven) and Colonel Zapt (C. Aubrey Smith), the Englishman is taken to meet the prince at his hunting lodge. The two lookalikes have dinner together as the prince tells Rudolph of the preparations for his upcoming coronation as king. The next morning, Zapt wakes Rudolph and informs him the prince had been drugged the night before and is now in a coma. Because of their similar appearance, Zapt prevails upon Rudolph to impersonate the prince at the coronation, otherwise the prince's evil brother Black Michael (Raymond Massey) will be crowned in his place. With the assistant of Zapt and von Tarlenheim, Rudolph bluffs his way through the coronation, successfully fooling Michael, who is shocked to see his brother alive. Crowned king, Rudolph then meets Princess Flavia (Madeleine Carroll), the prince's fiancee. As they proceed to the reception, Princess Flavia is amazed how kindly the prince is now treating her. Rudolph is falling in love with her, but Michael suspects something foul and dispatches Rupert of Hentzau (Douglas Fairbanks Jr.) to investigate the matter further, preparing to gain control of the throne at any cost.

Boyd Irwin
as Master of Ceremonies

Pat Somerset
as Guards at Lodge

Leslie Sketchley
as Guards at Lodge
View All

Critic Reviews for The Prisoner of Zenda

This 1937 Selznick production, directed by John Cromwell, is very pleasing to me. [Full review in Spanish]

This adaptation holds up really well, and Douglas Fairbanks, Jr. is terrific as the bad guy.

Nigh on to perfect swashbuckler.

Ronald Coleman is one of the greatest leading men in American cinema. High tea style acting mixed with an air of swashbuckling macho. Zenda is a treat.

As much fun as a swashbuckler could hope to be.

Audience Reviews for The Prisoner of Zenda

Ronald Colman leads a superb cast in the flashy O. Selznick swashbuckler about a Central European crown coup attempt momentarily thwarted by use of an imposter. But how long can the plucky charade play out? Anxious tension every step of the way, plus Douglas Fairbanks Jr., looking (and acting!) every bit like his father, plus a court romance, and a great dance set piece (in a ballroom of white marble!), spells 'classic' from the first frame until the triumphant ride off into the sunset. Did they really do "rides off into the sunset"? You betcha!

In the 1930's and 40's when you see Selznick's name on a film it was always top notch in every way. The acting, cinematography, costumes and set design are all A+. If you have seen Moon Over Parador then you know the plot of this film. The best thing about this film is the performance of Fairbanks Jr. There are multiple bad guys in this but he outshines them all , alot like Jeffery Wright in Shaft. A great swashbuckling film that is left open for a sequel that was too depressing of a book for Selznick to make.

"prisoner of zenda" is an original british swashbuckler with aristocraticly dashing ronald colman as the brave knight who defends the secred throne of a nation; madeleine carroll, the british rose, as the divine love interest; dandy douglas fairbanks jr. and raymond massey form a league of doublecrossing vallainy. the infatuation over this swashbucking tale has been remade four times in cinematic history. colman impersonates dual roles in this piece, the king to be throned and his identifical double who is merely an english man visiting outlandish nation. the king-to-be has been narcotized before the day he's about to be throned in consecration. so the loyal defenders of the king scheme to have the englishman as temporal substitute during his recovery. but the king's grudgy half brother covets the throne while his mischievous accomplice(fairbanks) drools over his mistress (mary astor). to add up the hardship, the englishman falls head over heels in love with the queen-to-be (carroll)...with all the conditions above, the price of honor and chivalric nobility appears precious. wouldn't that be the whole swashbuckler thing about? ronald colman has the elegant screen presence as well as his composed charisma in the aristocratic costumes, while madelein carroll luminates the scenes with her striking beauty in the utmost degree, particularly in the cross-staring in the annoitment scene. douglas fairbanks jr. has limited screen time but remain impressive with his naughty mannerism and rascal-alike grinning. "the prisoner of zenda" has every quintessential element of swashbuckler gendre except the consummation of romance since the queen-to-be selects her destined course of serving her royal house at the cost of her great one true love. the scene madelein bursts into an abrupt change of mind is sheer excellence of good acting. this is an aloof swashbuckler without the reward of his fair woman. perhaps tragic love emphasizes its gallantry for the ultimate swashbuckler without glorious compensation.

The Prisoner of Zenda Quotes