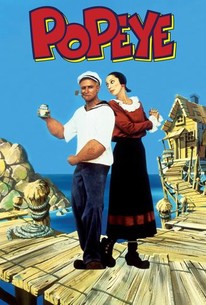 Critics Consensus: Altman's take on the iconic cartoon is messy and wildly uneven, but its robust humor and manic charm are hard to resist.

Critics Consensus: Altman's take on the iconic cartoon is messy and wildly uneven, but its robust humor and manic charm are hard to resist.

Critic Consensus: Altman's take on the iconic cartoon is messy and wildly uneven, but its robust humor and manic charm are hard to resist.

In the town of Sweetville, lovable sailor Popeye seeks out his long-lost father. Along the way, he vies with the rough Bluto for the affections of Olive Oyl and adopts the young Sweet Pea. This unconventional musical was based on the enduring (and endearing) cartoon character.

Sharon Kinney
as Cherry, His Moll

David Arkin
as The Mailman/Policeman

The plotting of this 1980 feature -- outsider in a hostile environment -- is personal to Altman, though few of the feelings survive the clutter.

It is more than faint praise to say that Popeye is far, far better than it might have been, considering the treacherous challenge it presented. But avoiding disaster is not necessarily the same as success.

You wonder how on earth Altman did it; equally often, you feel you are watching a wacky masterpiece, the like of which you've never seen before.

He takes one of the most artificial and limiting of art forms -- the comic strip -- and raises it to the level of high comedy and high spirits.

Eye candy...not without its charms...an exercise in excess few would hazard today.

The soundtrack is the one place where it seems to have ended up as exactly the film it set out to be.

It is evident that Robert Altman has crafted a painstaking, serious, and exemplary movie.

Reputation be damned, Popeye is a wonderful movie, beguiling and deeply strange. It's also a stealth remake: McCabe for kids.

An eccentric take on Popeye and friends.

A lot of it is klutzier than you may remember it being, and it leads to a wretched climax involving the fakest-looking octopus since Ed Wood's Bride of the Monster.

I reeeeeaaaaaaalllllllyyyyyy hated this movie...

A delightful and sweet adaptation that captures the innocent spirit of the comic strip and the cartoon, translating it to the screen with great songs, a splendid production design (the entirely constructed set of Sweethaven is fabulous) and priceless moments between Williams and Walston.

Considering that Popeye is such an icon, this live action adaptation of the comic is mediocre to say the least. I went into this one wanting to really enjoy this, but I couldn't enjoy it. This film doesn't stand out and it suffered from lack of effective material for the actors to work with. The film just doesn't deliver, and as a hole it's a mediocre film that isn't worth your time. Popeye could have been a great movie, but the film lacks in anything really entertaining. I felt that Robin Williams was wasted on such a lacking film, and with that being said, Popeye is a failed attempt at bringing a comic book character to the screen. I felt that the potential was wasted, and the ideas really could have stood out, if the script would have been rewritten. This film ends up being a boring film, one that never becomes anything really memorable or fun for the viewer. Don't expect anything great from this one, you'll greatly be disappointed, as this live action version of the comic strip just doesn't have anything going for it. I was really hoping that this film would have been a fun, entertaining ride, unfortunately, there never is anything to really make this film work, and in the end, it's a mediocre comedy that is void any humor, as the gags here simply suffer and are not funny. Don't go into this one wanting something memorable, you'll sadly be disappointed and this lazy film. Popeye had some interesting ideas, but the execution was poor, and watch something else, you'll be glad you did.

The sailor man with the spinach can! Good movie! This was Robin Williams first serious movie role and he is a brilliant Popeye. He brings so much humanity and pathos to this character that it is easy to see the great movies in his future. Shelly Duvall was born to play Olive Oyl and she does not squander the role of a lifetime. And in a smaller role, a standout performance is turned in Bill Irwin as Ham, Olive's bumbling, stumbling, clown of an ex-boyfriend. "Popeye" is a great conversion, from the comic strip to cartoon to film. With added depth and atmosphere, it remains an underrated classic appropriate for those willing to be transported by art to a fantasy land far , far away. However, overall, it's a nice, pleasing type of film. It's no award-winner, but it's a lot better than what you might have read from national critics. If you like Popeye's cartoons and comics, you should like this film, too. Buff sailor-man Popeye arrives in an awkward seaside town called Sweet Haven. There he meets Wimpy, a hamburger-loving man; Olive Oyl, the soon-to-be love of his life; and Bluto, a huge, mean pirate who's out to make Sweet Haven pay for no good reason. Popeye also discovers his long-lost Pappy in the middle of it all, so with a band of his new friends, Popeye heads off to stop Bluto, and he's got the power of spinach, which Popeye detests, to butt Bluto right in the mush. Watch as Popeye mops the floor with punks in a burger joint, stops a greedy tax man, takes down a champion boxer, and even finds abandoned baby Swee' Pea. He's strong to the finish 'cause he eats his spinach!

People have tried to dissuade me into believing that Robert Altman's 1980 adaptation of the beloved character and story of Popeye is nothing more than a pure Hollywood fiasco. While I'm sure that there may be some truth to that, I can't honestly say that I really enjoy it. Sure there's a pace that doesn't work and a story that isn't as fulfilling as you'd hope it to be, but there's some fun hiding in there. I think Robin Williams does a great job bringing the character to life, but the best performance of the film is Shelley Duvall as Olive Oyl. She was such a perfect choice to play that character and she just pulls it off effortlessly. This is really a live action cartoon, and I like it because of that. It may seem silly and strange at times, but I enjoy it. Watch for an early Dennis Franz during the first big fight scene at the restaurant.