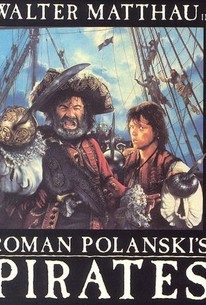 Although the title evokes a swashbuckling adventure, Roman Polanski's Pirates tuns out to be a seagoing tale with a bit of a difference. Captain Red (Walter Matthau) runs a hardy pirate ship with the able assistance of Frog, a dashing young French sailor (Cris Campion). One day Capt. Red is captured and taken aboard a Spanish galleon, but thanks to his inventiveness, he raises the crew to mutiny, takes over the ship, and kidnaps the daughter of the governor of Maracaibo (Charlotte Lewis, soon to co-star in The Golden Child opposite Eddie Murphy). The question is, can he keep this pace up?

Cris Campion
as The Frog, Jean-Baptiste

José Santamaría
as Master at Arms

Robert Dorning
as Commander of Marines

Yo-ho-ho and a bottle of Maa lox for Pirates, the sorriest movie ever to fly the Jolly Roger.

If Roman Polanski has done a worse film than Pirates I certainly haven't seen it.

Back before Johnny Depp revolutionised the pirate movie with his camp ways there were the odd rum fuelled flicks such as this. Roman Polanski doing what he does best which is creating lavish productions that tend to not be overly successful at first but gain cult status. The story is naturally a typically salty one involving Walter Matthau's 'Captain Red' and his young French sidekick trying to pinch a golden throne from some fancy pant Spaniards. At the same time there is of course a love interest for the young dashing French sailor, mutinies, plenty of galleon boarding from both sides and lots of skullduggery on land and at sea. I think this film is very similar to 'The Fearless Vampire Killers' in the fact that its actually kinda dull but looks beautiful. All the pirates, especially Matthau, look as they should do, covered in dirty rag-like attire, greasy facial hair, deep tans, golden teeth...every bit the stereotypical swashbuckling sea dog. I was quite intrigued with the wooden leg Matthau's Captain has, it really looks like he has a real wooden peg leg! and this is before CGI folks, impressed. On the flip side the Spanish look perfectly rich, aristocratic, pompous, snooty and dignified in their very impressive duds. The wigs sell the whole look if you ask me, really authentic looking. I was also very impressed with Matthau's cockney English accent. He genuinely does a sterling job with it and comes across not American that's for sure. At the same time Damien Thomas as the preening perfume smelling 'Don Alfonso' is by far the stand out performance. You can truly see the disgust and contempt in his face for the wretched pirate scum, I really enjoyed his peacock-like display of regal superiority. All the characters and extras look great and are accompanied by some luscious tropical locations and some nice olde worlde period ports (real locations). Did I mention the ship yet? no? well lemme tell you, it looks awesome. Fully realised to scale with a working motor so it can sail, completely detailed from top to bottom with everything you'd expect to see on a 17th Century Spanish vessel. Yep its all visually stunning with good performances but unfortunately that's about it. There is very little of interest going on plot wise, the film is way too long and there isn't that much swashbuckling going on surprisingly. This isn't a silly fantasy flick nor is it a historically accurate flick, but it does bring a more down to earth approach to the genre. There isn't much flamboyant heroics here ladies and gentlemen, more like backstabbing with every man for himself, more genuine. No way is it as bad as suggested and I'm not sure why it didn't do better at the cinema, its a solid romp. Think along the lines of Richard Lester's Three Musketeer movies but with less comedy.

Quirky, uneven comedy that coming from Polanski I expected a little bit more out of. Now I understand why it doesn't have a legitimite release on DVD.

An atypical and charming adventure. It's great to see an auteur like Polanski shaping his vision no matter what genre or tone he's in, but in this case he forgot to apply a little more carefree attitude. some parts are great but still most of the film lacks sparkle and rhythm. Walter Matthau is amazingly cool in his role of a greedy, filthy and wisecracking old pirate.

This Polanski pirate adventure bombed at the box office and was slated by critics, but I actually found it great fun. It was probably the first to deconstruct the classic swashbuckler, showing the grimier, more seedy side of piracy. It has loads of humour and period detail in a similar vein to Richard Lester's The Three Musketeers and Walther Matthau is always great fun to watch. Think of it as "the adventures of Jack Sparrow's dad"!