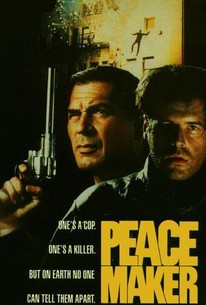 A woman is caught in the middle of a cat-and-mouse game between fugitive aliens in this sci-fi thriller. A mysterious man named Townsend (Lance Edwards) attempts to steal a gun from a police car; an altercation results, and Townsend is repeatedly shot by the cops. Medical Examiner Dori Caisson (Hilary Shepard) is performing an autopsy on Townsend's seemingly dead body when his wounds suddenly heal, and Townsend forces Caisson to help him escape. Townsend and Caisson are soon approached by Yates (Robert Forster), who attempts to kill them and sends them on a high-speed chase. The next morning, Townsend tells Caisson that he is actually a law enforcement officer from another world, and that Yates is a criminal from his planet whom he is assigned to apprehend. Townsend's ability to resist bullets and heal himself convince her that he is indeed from another world, but she's not so sure who is the good guy. Peacemaker also features Robert Davi as a cop involved with Caisson, and Bert Remsen as Doc.

Robby Robinson
as Junkie #1
View All

There are no critic reviews yet for Peacemaker. Keep checking Rotten Tomatoes for updates!

There are no featured reviews for Peacemaker at this time.