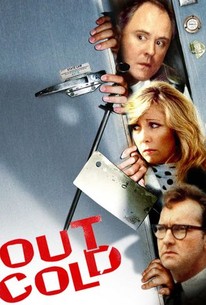 Dave (John Lithgow), a meek, unassuming man who's the co-owner of a butcher shop, discovers his obnoxious business partner Ernie (Bruce McGill) dead in the meat locker. Dave thinks he might have accidentally locked Ernie in and caused his death. Much of the movie involves Dave's efforts to dispose of the corpse. He's aided in his efforts by the dead man's wife Sunny Cannald (Terry Garr), who used to be his girlfriend. Romance between the two is rekindled while Sunny tries to help Dave, meanwhile covering up a secret of her own. Complications are caused by the world's most incompetent private detective Randy Quaid), who Sunny had hired to get evidence that her husband was cheating on her. This somewhat disjointed black comedy got a "stiff" reception by most reviewers, despite the comic talents of the cast.

Critic Reviews for Out Cold

Audience Reviews for Out Cold

An entertaining dark comedy with a good cast, and they do a good job too, but I really felt it could have been better somehow.