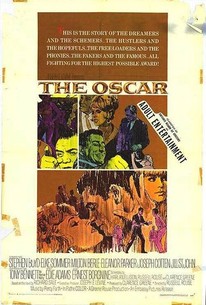 A heartless actor scrambles to the top of show business' sleazy summit in this drama. Frank Fane (Stephen Boyd) is a Hollywood leading man who is desperate to boost his career by winning an Academy Award, and he doesn't care who he has to betray to achieve his goals -- including his former best friend and PR man, Hymie Kelly (Tony Bennett), lonely acting coach Sophie Cantaro (Eleanor Parker), slimy agent Kappy Kapstetter (Milton Berle), and long-suffering girlfriend Kay Bergdahl (Elke Sommer). However, as Frank waits for his name to be called, certain that victory is in his grasp, fate has a little secret in store for him. The Oscar marked Tony Bennett's onscreen acting debut. The screenplay, based on the novel by Richard Sale, was written in part by award-winning author Harlan Ellison, who is known to often take comical potshots at the film, which he considers a low point in his career.

Edith Head
as Herself

Hedda Hopper
as Herself

Bob Hope
as Himself

Merle Oberon
as Herself

Frank Sinatra
as Himself

Nancy Sinatra
as Herself

Johnny Grant
as Himself
View All

News & Interviews for The Oscar

View All The Oscar News

Critic Reviews for The Oscar

This is the story of a vicious, bitter, firstclass heel who rises to stardom on the blood of those close to him. Without a single redeeming quality, part played by Stephen Boyd is unsympathetic virtually from opening shots.

Tacky Tinseltown soaper, logging the unscrupulous rise to stardom of an Academy-nominated actor in a succession of flashbacks, featuring numerous stellar walk-ons and dreadful dialogue.

A piece of expensive claptrap, loaded with harrowing clichés.

A melodrama whose seriousness is so overbearing that it's long been hailed as a kitsch classic in some circles.

Worth watching for the truly bizarre plotting and dialogue, which plays like a bad daytime soap opera complete with dramatic music stingers.

iI's all one big, crushing bore.

A film of such outsize awfulness as The Oscar is at least in a jolly tradition and in a few years, who knows, may turn up as an affectionately remembered classic of the purple-patch school.

It may be the quintessential Hollywood movie, except that it was greeted with guffaws on sight.

The plot here is so melodramatic and so unrealistic that the film becomes laughable.

Another bad movie about Hollywood.

Audience Reviews for The Oscar

"The Oscar" is bad, sure, but it's not as hilariously bad as I was led to believe. Not bad enough to worth taking the time to see. The script has many terrible attempts at "snappy wit," but the stale lines aren't as notable as Stephen Boyd's awful lead performance as a heartless, second-tier actor conspiring to save his career -- he adopts some ape-like mannerisms that are truly bewildering. An incredible set of stars passes through the film (Bob Hope, Frank Sinatra, Merle Oberon, Peter Lawford, Hedda Hopper, Broderick Crawford, Ed Begley Sr., Joseph Cotten, Tony Bennett), and Milton Berle (as Boyd's agent) and Ernest Borgnine (as a shady private investigator) have some good moments in supporting roles. But if you're looking for campy laughs from this era, other silly bombs such as "Skidoo," "Valley of the Dolls," "Candy," "The Cool Ones" and "Myra Breckenridge" provide greater rewards.