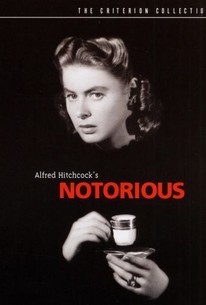 Critics Consensus: Sublime direction from Hitchcock, and terrific central performances from Ingrid Bergman and Cary Grant make this a bona-fide classic worthy of a re-visit.

Critics Consensus: Sublime direction from Hitchcock, and terrific central performances from Ingrid Bergman and Cary Grant make this a bona-fide classic worthy of a re-visit.

Critic Consensus: Sublime direction from Hitchcock, and terrific central performances from Ingrid Bergman and Cary Grant make this a bona-fide classic worthy of a re-visit.

A convicted traitor's daughter becomes a U.S. Government spy and falls in love with a fellow agent. She then accepts a dangerous assignment that requires her to marry her father's Nazi friend in Rio de Janeiro. Suspense, intrigue, and romance are stylishly mixed in one of Alfred Hitchcock's best films.

Aileen Carlyle
as Woman at Party

Dink Trout
as Clerk at Court

It's completely hypnotic: from the twisting strands of a plot defying us fully to trust anyone, to those Hitchcock specials, the shots and scenes where the camera too is a lethal conspiracist.

The virtuoso sequences -- the long kiss, the crane shot into the door key -- are justly famous, yet the film's real brilliance is in its subtle and detailed portrayal of infinitely perverse relationships.

Production and directorial skill of Alfred Hitchcock combine with a suspenseful story and excellent performances to make Notorious force entertainment.

It's the accuracy, efficiency and control of Hitchcock's direction that most impress. They enable him to dovetail the film's thriller format and romantic story to dizzying, expressive and unique effect.

Notorious has fascinating echoes of other Hitchcock movies such as Rebecca and Psycho. A must-see or must-see-again.

Here Grant's continental accent is used to icy perfection, each clipped word as sharp and vicious as the point of blade.

The first love-scene between Miss Bergman and Mr. Grant is the most incandescent interlude ever to reach the screen.

There are more obviously Hitchcockian films, like the big Technicolor masterpieces he made in the 1950s - Rear Window, North by Northwest, Vertigo - but nothing quite matches the sense of danger Hitchcock found in his stars in Notorious.

Hitchcock's most emotionally nuanced and most adult depiction of relationships feels as vital as ever.

The sequence where Grant and Bergman discover Rains' secret in the wine cellar is textbook suspense, and it's easy to see why Hitchcock was the master at this kind of filmmaking.

Matthew Lucas
From the Front Row
View All Critic Reviews (46)

Despite a forced romance that comes out of nowhere and how the protagonist's motivations are not really convincing (especially with all that misogyny towards her), it has a wonderful direction and becomes extremely suspenseful after a while, with its two leads in great performances.

Incredibly suspenseful, with a mesmerizing Bergman performance, but compared to other Hitch I find this one rather forgettable. Not a bad movie, by any stretch, and racy for its time, but it just didn't hit me as hard as his later work does.

I'll keep this brief, as everyone has already said all that's needs to be said about this, and better than I can. It's a classic romantic espionage thriller, done in the classic Hitchcock style, and involving two of his favorite things: romance and suspense. This is typical stuff, done in the typical way, but to the Nth degree. An American secret agent named Devlin gets a beautiful woman with a tainted past named Alicia to help him take down the leader of a neo Nazi group. She falls in love with her target, but, not only is her life in danger, she feels upset that Devlin may or may not love her, and he's conflicted because not only does he love her, he can't really tell her since she goes so far as marrying her mark to bring him down..and trying to save her might not happen, and on and on. Pitch perfect performances (espeically Bergman's), a great set up, and some truly excellent cinematography (love the long take during the party scene), and some wonderful moments (drunk driving scene, et al) highlight what would otherwise be generic crap in the hands of any other director. Just go see it already. I can't think of any other way to recommend this than that.