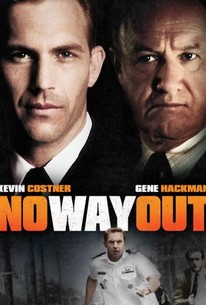 Critics Consensus: Roger Donaldson's modern spin on the dense, stylish suspense films of the 1940s features fine work from Gene Hackman and Sean Young, as well as the career-making performance that made Kevin Costner a star.

Critics Consensus: Roger Donaldson's modern spin on the dense, stylish suspense films of the 1940s features fine work from Gene Hackman and Sean Young, as well as the career-making performance that made Kevin Costner a star.

Critic Consensus: Roger Donaldson's modern spin on the dense, stylish suspense films of the 1940s features fine work from Gene Hackman and Sean Young, as well as the career-making performance that made Kevin Costner a star.

No Way Out Photos

No Way Out is told in flashback as Naval officer Tom Farrell (Kevin Costner) is grilled by his superiors regarding a recent "unpleasantness." While at a Washington party, Tom meets Susan Atwel (Sean Young), and they're soon sharing a steamy love scene in the back of a limo (marvelously parodied in 1993's Hot Shots! Part Deux). Several months pass before Tom meets Susan again; he discovers she's the mistress of the US Secretary of Defense David Brice (Gene Hackman). When Susan is murdered by Brice, his loyal aide (Will Patton) dutifully destroys the evidence and invents the fallacious theory that a KGB mole was responsible. Tom is assigned to locate that mole -- a perilous situation, since Tom knows that no such mole exists, but must go along with the charade since he was the last person who was seen with Susan.

Will Patton
as Scott Pritchard

Nicholas Worth
as Cup Breaker

Jeffrey Sudzin
as Man with Lighter

News & Interviews for No Way Out

View All No Way Out News

Critic Reviews for No Way Out

While the film's behind-the-scenes look into the world of Washington bureaucracy is appealing, the movie is a complete letdown as a thriller, dissolving into implausible silliness.

No Way Out emerges, paradoxically, as a film that is better than it has to be and not as good as it ought to be, but there is skill here, as well as an admirable willingness to try something new.

No Way Out's greatest prize is Costner, a leading man at last: fiercely good, intelligent, appreciatively sensual in a performance balanced perfectly between action and introspection.

A thriller that grabs you even before the ironies of its plot kick in is a thriller you don't want to miss. No Way Out is that sort of movie, a thriller that's thrilling throughout.

A juicy thriller-romance bursting out of the Pentagon's arid corridors.

Viewers who arrive at the movie five minutes late and leave five minutes early will avoid the setup and payoff for the preposterous twist that spoils this lively, intelligent remake of 1948's The Big Clock.

The work of the cinematographer John Alcott, the actors, and the rhythm are qualities to appreciate in No Way Out. [Full Review in Spanish]

The summer's best movie is No Way Out, a complex, rip-roaring suspense tale with a difference: It's about believable people caught in a real jam.

No Way Out is a secret noir.

No Way Out may take about half its runtime to finally get the story moving, but when it does, the audience is treated to a grand thriller that keeps you on the edge of your seat.

The film is remembered for its limo sex scene.

The action is tight and suspenseful, and the plot culminates in the most astounding last-minute switch of the decade.

Audience Reviews for No Way Out

An implausible thriller that requires suspension of belief quite often but is saved by the charm of its leading cast. Will Patton in particular works overtime to sell his part, Hackman (it needn't be repeated) is always solid, while Young and Costner find a way to exemplify young lust. This was not as good as I hoped, but better than I thought it would be. The twist at the end is worth one star all on its own.

This is a pretty damn good and entertaining suspense/thriller. This is one of those movies that keeps getting better is it goes along and it, most definitely, ends on a high note. If I had a problem with the film is that, until Susan's death, the romance between her and Tom was a little corny. The acting is strong all around, but I didn't find these parts particularly intriguing. Not bad, but not memorable either. When Susan is murdered, that's when the movie kicks into high gear. I found the mystery surrounding the investigation, even though everything, up until the twist, seems pretty cut and dried as to the events that happened. You get to see this story of this man, Will Patton, who's so loyal to David Brice that he's willing to do anything, and I do mean anything, to make sure that Brice is not implicated in the murder by using this cover story of a KGB agent that's infiltrated the Department of Defense. Since Will Patton's character is such a manipulator, and the brains, of the entire investigation, you never for a second doubt Tom's innocence. Which is where the twist comes in. I'm assuming anyone who reads this will be able to put two and two together, but I'm still not gonna spoil it as it would ruin most of the fun of the movie. The thing about the twist is that it's actually really very logical and fits in with the theme of the movie perfectly. The problem with most twists nowadays is that a lot of them are just done because it's shocking and not because it actually makes sense within the story you're telling. It's tremendous when you think about it because you really think that the twist itself is a red herring and something meant to throw you off what is actually happening. The twist in this movie is genius to be honest, it's surprising but completely logical within the story they're telling. And the movie is just really exciting and fun to watch once Susan dies. I must make mention of Will Patton, who is absolutely tremendous as the main villain. He's such a perfect prick, a man who will do anything to keep his position of power. He's also a highlight in the film. So all in all, this is a really entertaining thriller with a great twist. Great acting from all involved too, so I can't complain that much other than the really corny romance.

Costner vehicle saved from total mediocrity by, yet again, Gene Hackman (he should've belonged to International Rescue the number of dreary Hollywood thrillers he's salvaged...) Decent twist at the end, too.

Tense and racy thriller in Pentagon. Sean Young's hotter in naked when she asked her close friend to borrow her apartment for a night.

No Way Out Quotes