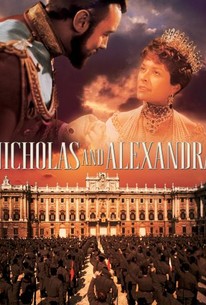 Nicholas and Alexandra covers the rise and fall of the last of the Russian Romanovs. We first meet Czar Nicholas (Michael Jayston) and his German bride Alexandra (Janet Suzman) at their 1894 wedding. Though Nicholas is devoted to Alexandra, the Russian populace is less politely inclined to having a "foreigner" as their Czarina. Alexandra gains favor when she gives birth to the much-loved Prince Alexis (Roderick Noble). Alas, Alexis suffers from hemophilia, a disease which strikes every second generation of Alexandra's family. When all conventional medical ministrations fail, Alexandra puts the fate of her son in the hands of mystical holy man Rasputin (Tom Baker, later famous for his portrayal of Doctor Who). As Rasputin's influence and power grows, the Russian peasantry becomes more restless and disgruntled. They are now willing to listen to the speeches of such rabble-rousers as Lenin (Michael Bryant) and Trotsky (Brian Cox), who sow the seeds of revolution. Even after the murder of Rasputin, the Bolsheviks are unsatisfied: The revolution finally comes to pass in October of 1917. At first, the moderate Kerensky (John McEnery) pleads with his followers to allow the Romanovs safe passage out of Russia. But the radicals seize control, and on July 16, 1918, the royal family is summarily executed.

Irene Worth
as the Queen Mother

News & Interviews for Nicholas and Alexandra

View All Nicholas and Alexandra News

Critic Reviews for Nicholas and Alexandra

Sam Spiegel comes up with a rarity: the intimate epic, in telling the fascinating story of the downfall of the Romanovs.

One can be more or less hypnotized by the spectacle of their downfall, but it's difficult to be really moved by it.

The problem with Nicholas and Alexandra is that it considers the Russian Revolution from, in some ways, the least interesting perspective.

When James Goldman's script hits one of its frequent dead spots, Schaffner's camera is there to take up most of the slack with elegantly designed wide-screen compositions.

The saddest failure though is Schaffner's inability to find a real centre for the film, and so achieve the kind of precarious constellation of forces that has formed round his protagonists in the past.

Opulent and well-acted, although fidelity to history is occasionally frayed.

While it remains a treat for the eyes, Nicholas and Alexandra suffers from the filmmakers' attempts to tell too much.

A lengthy, visually impressive period piece with little in the way of new material or fresh spins on history to distinguish it.

This lavish but a bit stale and overlong epic about the tragic fate of Ruusia's last czar and his wife (well acted by Janet Suzman) was nominated for the Best Picture Oscar.

Production values are high, but it lacks momentum.

Audience Reviews for Nicholas and Alexandra

Although terribly mad and unsympathetic in actions, you can't help but feel some concerns with how Nicky and Alexandra are treated by the communist revolution. Tom Baker is a fantastic in the only non Doctor Who role that I have seen him in.

Approrpriately stately, visually beautiful but pondrous version of the tragic story of the doomed Russian royal family. The acting for the most part is fine but the canvas of events is so large that even at the extensive length almost all other characters excepting the two leads pass through without much depth. An interesting film but never compelling.