Mutiny on the Bounty1962 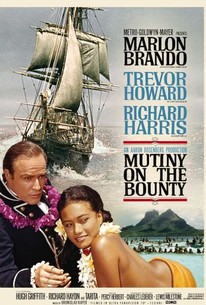 Mutiny on the Bounty Photos

This colorful remake of the 1935 version again concerns the crew and treatment of the HMS Bounty by a cold hearted sadistic captain. Captain Bligh (Trevor Howard) boards the ship in Portsmouth, England, to embark on a mission to bring tropical breadfruit trees to Jamaica. Fletcher Christian (Marlon Brando) is the aristocratic second mate who welcomes the new captain aboard. Christian's view of the captain sours with the cruel treatment of the crew and the dangerous decision to round Cape Horn. The Bounty sails into the teeth of a ferocious winter storm which is another in a long line of indignities suffered on the journey. John Mills (Richard Harris) is punished for stealing cheese. A sailor is ordered to stay aloft in the crow's nest, nearly resulting in death. The crew finds temporary paradise in Tahiti before Bligh's behavior becomes intolerable for the once faithful Christian. The crew revolts and sends the captain on his way in a small rowboat. Settling on Pitcairn Island, the crew soon realizes they may never see England again. Mills burns the ship to insure the trip is never made. Christian attempts to save the only means of transportation of their new island home. Lewis Milestone directed the film which was plagued by constant cost overruns to the tune of 18 million dollars. Brando's legendary ego clashed with results as turbulent as the fictitious trip around stormy Cape Horn. The movie retained slightly over half the cost of the production price tag in its initial release. ~ Dan Pavlides, Rovi

News & Interviews for Mutiny on the Bounty

View All Mutiny on the Bounty News

Critic Reviews for Mutiny on the Bounty

Brando makes a total mess of his English accent, the romantic interlude in Tahiti goes on endlessly, and the visuals (perhaps the main point of interest in the movie) too often resort to travelogue vistas and picture postcard lighting.

Hardly anyone was pleased with the results.

MGM spent some $20,000,000 on the film. They could have saved most of it and had a better picture by sticking to the Bligh-Christian conflict and omitting the Spectacular Clutter.

I would happily see the film again for the two main per- formances, which, all the same (for reasons of direction and, more basically, of concept),'I would call failures, Mr. Howard's in particular; since the face has its ingrained morality.

A troubled production, with clashes between Brando and the original director, technical problems, but despite all that, the movie has some good moments.

With Clark Gable's recent death creating an awareness and an expectation in moviegoers of 1962 for a robust and manly Gable characterization, instead Brando delivered a nasally, aristocratic poseur

Its picture postcard scenery couldn't hide how colorless the film felt at times.

Audience Reviews for Mutiny on the Bounty

Trevor Howard is no Charles Laughton and as a result, this remake doesn't quite have the same impact as the 30s version. Brando is the exception as Fletcher Christian.

This movie is notorious for the endless production conflicts involved in its making, many of them detrimental to the career and reputation of Marlon Brando. It's too bad that the issues involved with making the film often overshadow how impressive it really is. This picture is all spectacle - the color-soaked photography, majestic direction and theatrical performances make this an adventure worth being a part of. The tension between Trevor Howard and Marlon Brando is outstanding, and I think that's a testament to how well they portray their characters. Lewis Milestone does a brilliant job of working around the endless problems associated with shaping this epic. It feels polished and precisely crafted. Essential viewing for fans of large-scale Hollywood filmmaking, or for Marlon Brando enthusiasts.

Marlon Brando is brilliant in this epic movie. An oldie but a goodie.

Mutiny on the Bounty Quotes