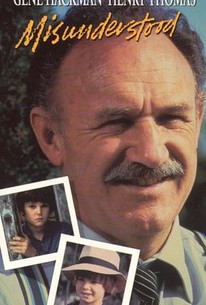 In Misunderstood, Henry Thomas ("Elliot" in E.T.) co-stars with Gene Hackman as a son-and-father duo who through no fault of their own fail to communicate their mutual affection. Ned (Hackman) is a shipping magnate living with his family in a villa in Tunisia when he suffers through the death of his wife Lilly (Susan Anspach). It is an agony for him to tell his older son Andrew (Thomas) that his mother has died, and from that moment on, he is so overcome by his own grief -- drowning it in work -- that he unwittingly hurts the feelings of the two boys. He was always inept in relating to them, and now it is even more difficult. The two brothers compensate by inventing their own pastimes, though a visiting relative chides Ned for expecting his sons to handle themselves like adults. So just as Ned begins to realize what he has been doing, the sons try harder to keep up a good facade -- and then Andrew has a serious accident, causing all the undercurrents to suddenly emerge on the surface. Loosely based on a 1967 Italian film, Incompreso, this story first emerged as a turn-of-the-20th-century novel by Florence Montgomery and is here told by director Jerry Schatzberg, but the dialogue and plot do not reach the level set by the good interpretations of the lead actors, who transform a predictable story into an emotional experience.

Rip Torn
as Will

Habiba
as Girl on Donkey

There are no critic reviews yet for Misunderstood. Keep checking Rotten Tomatoes for updates!

This movie was one of the touching movies I have seen. Stars Gene Hackman and Henry Thomas. Just a simple story of a Father trying to raise his two sons after the death of the mother. Very sad and depressing, but also a wonderful story of a family trying to cope with death.