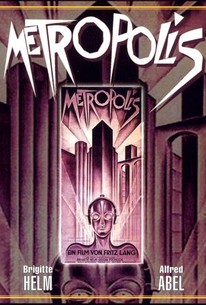 In a futuristic city sharply divided between the working class and the city planners, the son of the city's mastermind falls in love with a working class prophet who predicts the coming of a savior to mediate their differences.

Heinrich George
as The Foreman

Fritz Rasp
as The Man of Black

Margarete Lanner
as Woman in Car

Heinrich Gotho
as Master of Ceremonies

Often enough it is exciting in a broad, elemental way, just as an earthquake or a loud clap of thunder would be exciting; but when individual characters come on to the screen they rouse little Interest for their own sakes.

For years audiences have wondered how good this film might have been had it not been edited. It turns out that it's better than anyone could ever have expected.

Occasionally it strikes one that [Lang] wanted to include too much and then that all one anticipates does not appear. But at the same time the various ideas have been spliced together quite adroitly.

Each frame of this classic is drop-dead stunning.

Is Fritz Lang's 1927 epic Metropolis the most influential film ever? It certainly spawned the cinema of futurism, and watching it today. it's uncanny to see how many shadows of cinema yet to come it already contains.

Here is the starting-point of so much modern cinema.

Metropolis is unique because of its character, but it won't thrill anyone or make money. [Full Review in Spanish]

I appreciate what it accomplished for the time and how influential it is. It's a classic, but one that maybe doesn't hold up to modern viewing...

What makes the movie more than a well-designed curiosity is its theme of how humanity can be swallowed by technology.

The cinema, even here at its best, and full as it is of invention and thrill, is still only at the mental age of seventeen.

The broad brush strokes Fritz Lang painted this masterpiece with actually work to give the casual intellectual consideration its timely weight even to this day. One of its many insights: that technology promising freedom will be used to further enslave the witless millions, rings clear and true even now. And the performance of Lang's leading lady, Brigitte Helm, is mesmerism itself!

Metropolis, once a sprawling epic drama of science-fiction, it shows its age today. The scope of great visual splendor and architecture are great, but are too few in between and only show in flashes of scenes amid-st a cacophony of a vague protagonist, a priestess character and collective enemy.

Dystopian Society films are one of the most interesting genres to tackle. Each film brings a portrait of a society that is unique in the way that it oppresses its citizens. George Orwell did it with his stunning masterpiece of literature 1984; Aldous Huxley did the same with Brave New World. However those two are novels, but these are two examples of such works. In film however, Dark City, Children of Men and A Clockwork Orange are three such examples of films that have stood out in the genre. However, one picture is one of the defining works, Fritz Lang's 1927 Science Fiction masterpiece Metropolis, which is a brilliant work on using dystopian concept to tell an engaging story. Using simple ideas, Lang's portrait of a society is sublime, poetic and ultimately nightmarish. Since this is a silent film, the visuals are what keeps you enthralled at Lang's portrait of this society. In terms of Science Fiction, Metropolis is a standout work of imagination, storytelling, and filmmaking. Lang's ideas are wonderful, and though the story here is simple, the sheer visuals, especially effects are what captures your attention, considering that this was made in the 20's, a relatively young time for cinema. The innovative film techniques used to create the film are truly wonderful, and the sets are brilliant, and it's exactly what you'd expect from a dystopian society. I've seen my fair shares of dystopian films, and read plenty of works, and Metropolis ranks as one of the genres finest achievements, not just in film, but in the dystopian genre as a whole, literary and film. The sheer vision that Fritz Lang has for his society is exactly how you'd expect a world like this to look. Would plenty of other films and books that has surfaced in the genre, it's no wonder that Metropolis has influenced many filmmakers and authors alike, upon watching this film, you see plenty of memorable images that have inspired their work. Metropolis is a work of brilliance because it presented new ideas, and stretched the boundaries of what you could do in the cinematic medium when little technology. I thought this was a stunning piece of cinema, and if you're on a quest to further your knowledge of great movies, I highly recommend that you watch the film. Even today, the film looks impressive because of the creativity that went into accomplishing such a feat in cinema.

The son of an industry tycoon leads a proletarian rebellion. Like many science fiction films, this early example of the genre is anti-science, portraying progress as synonymous with technological determinism and anti-humanism. But the film is passionately produced and a technological achievement. The performances are all excellent, especially Brigitte Helm's turn as angel and automaton devil. Overall, modern science fiction films owe a debt to one of the earliest and best of its genre.