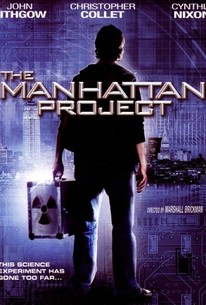 Everyone knows that teenagers are smarter than adults, and if given a chance the kids could save the world -- if they don't blow it to bits first. The Manhattan Project tells of how 16-year-old Paul Stephens (Christopher Collet) tries to alert his community to the dangers of nuclear energy. John Mathewson (John Lithgow), a doctor in a pharmaceutical research plant wherein covert plutonium experiments are taking place, is the boyfriend of Paul's mom, Elizabeth (Jill Eikenberry). While Mathewson is romantically occupied, Paul and his girl, Jenny Anderman (Cynthia Nixon), steal the plutonium and construct their own atomic bomb. They do this, of course, as a warning to foolhardy grown-ups -- none more foolhardy than the folks who put up good money to make this film. The Manhattan Project was directed by longtime Woody Allen collaborator Marshall Brickman, whose expert sense of comic timing obscures the thickheaded "message" of this picture.

Kerry Donovan
as Himself

Richard Caselnova
as SWATS
View All

News & Interviews for The Manhattan Project

View All The Manhattan Project News

Critic Reviews for The Manhattan Project

A clever, funny and very skillful thriller about how the kid builds his own atomic bomb.

Marshall Brickman's The Manhattan Project is also about the development of a nuclear device, but it's a lot of fun and perhaps the most exciting movie of the summer season so far.

Many viewers will find themselves cheering for the military men and FBI agents a they try to stop this self-centered kid from achieving his dream of personal glory.

a highly underrated film that anyone can enjoy -- even if you aren't a massive, massive nerd.

Often more exasperating than it is entertaining.

There was something absorbing about these nuclear scientists doing their job.

Audience Reviews for The Manhattan Project

Paul (Christopher Collet) is your typical slacker genius, with a bit of a bad streak. One day, he crosses paths with John Mathewson (John Lithgow), a nuclear physicist who arrives in his peaceful suburban hometown to set up a plutonium refinery hidden behind the less threatening façade of Medatomics, a company specializing in nuclear medicine. Sure enough, Mathewson starts to get soft on Paul's mom, so he invites Paul out to the lab to check out the cool lasers and get some bonding time in. What Mathewson fails to realize is that Paul doesn't just have his head in the big books, he's a borderline criminal mastermind with a flair for the dramatic. Little does Paul know, the plutonium he's about to hijack is 99.997% pure. This mutual misunderstanding forms the basis behind the rest of the plot to follow. Aided by Jenny (a teenaged Cynthia Nixon of "Sex and the City" fame), Paul builds from scratch his own private nuclear bomb, perhaps for the political activism aspect, but most likely for the challenge. He's the unassuming punk of the science fair, a sarcastic, easygoing prankster surrounded by quirky science nerds who won't get laid until they're 37. This isn't his scene, and he's not here to compete with these kids. His aspirations are grander. At which point, Mathewson makes the connection his plutonium is missing. That's when this innocent scholarly pursuit goes horribly, horribly wrong. Let's just say Paul's brand of political activism is performance art. And the name of his piece is "mutually assured destruction." The Manhattan Project has more soul than most '80s "science whiz" movies in its class. A lively, charming bomb construction montage, and the product placement of Duracell on the bomb itself, have "classic" written all over them. Snappy, wisecracking dialogue decorates the script: "Jenny...I never thought I'd say this to anybody, but...I gotta go get the atomic bomb out of the car." Most of the time, it's a lighthearted, idealistic retelling of the Radioactive Boy Scout - less a cautionary tale and more of a "kids versus the adults" caper. Scenes of Paul implementing devious chemistry, pranking the class know-it-all with home-brewed explosives, and outwitting security guards, government personnel, and the military puts this movie in the same league as Wargames. Half the fun is watching how easily Paul manipulates his environment: He fires up computer consoles in a government lab like he's going for the high score at Pac-Man, makes operating a robotic arm look as easy as riding a bike, and maneuvers an RC car with the deftness of Jason Statham in Transporter 3. I laughed particularly at the simplicity with which he acquired C-4 and the nonchalance with which he handled weapons-grade plutonium. Unbelievable? Of course. But it's a hella good time. What makes it work is the character of Mathewson: he's far from the preachy buffoon of an authority figure typically relegated to this kind of role. We don't even have any conflict arising from him stepping into the shoes of Paul's absent father. Instead of piling on reasons for him and Paul to be at odds with each other, the writers have crafted a more interesting, respectful relationship. You're endeared to both of them simultaneously, and only want for them to form their inevitable alliance, which is continuously prevented by circumstance. There's no pointed commentary here. It's antinuclear proliferation to be sure, but that's about where the political sophistication ends. There is no villain in a black hat...that is, until we reach the end of the second act, where The Manhattan Project suddenly turns into my second-favorite scientists-vs.-military movie behind The Abyss. Mathewson is a competent, morally sound realist surrounded by halfcocked gorillas. It's his character whose dramatic arc we're witnessing. He admires Paul for his resourcefulness but doesn't understand his motivations. By the end of the film, he's squaring off with the military himself. At one point near the film's frantic climax, he turns aside, hundred-yard-stare, a sheen of sweat on his brow, and you feel his guilt about the power his lab-coated ilk have willfully turned over to the men with big guns and little brains - an exchange that has been going on, in this field of science, since the titular event of 1942. Oddly enough, the last ten minutes pack the most comedic punch. Or maybe that's just my devious sense of humor. Overall, The Manhattan Project is great fun. An unpretentious script, memorable scenes, and one of Lithgow's best roles (if I may be so bold) make this an undeniable cult classic. If you haven't seen it yet, it's the perfect fix to your '80s nostalgia habit.

Elizabeth: Paul, did you build an atomic bomb?  Paul: Only a little one.  The Manhattan Project is a fun movie; a completely ridiculous and unrealistic one, but fun nevertheless. The story is about a high school student, Paul, who is a science genius. When he is invited by his mothers new male interest to a laboratory, he goes excitedly. When he gets there, he notices thing that make it seem like they are building atomic bombs there. So he comes back another night, breaks into the government lab, steals some plutonium and then builds an atomic bomb. Yeah, I said it was unrealistic.  There's nothing here that is too fantastic. The performances aren't the greatest and the story obviously has it's share of problems. With that said, I was entertained throughout, so I would give it a mild recommendation, but there is something about the movie that does really annoy me. That would be that the hero of the movie Paul puts millions of people's lives in jeopardy and is still considered the hero. I don't want to give the ending away, but it really sort of pissed me off to say the least. The ending makes an already completely unrealistic movie all the more, unrealistic. It may sound like I really hate this movie and I guess I really do dislike the idea of it, but like I said before it was entertaining. In the end thats all I wanted this movie to be. It didn't have to be a smart thrill, just an entertaining one.

Another good teen movie about the whole nuclear crisis of the 80s. This is an incredible story, but a good one too. I liked it.

Contemporary comedy-adventure-thriller concerns a high-school youth who, with the aid of his idealistic girlfriend, steals some plutonium and makes his own nuclear bomb. There's a pleasing balance of humour and suspense.