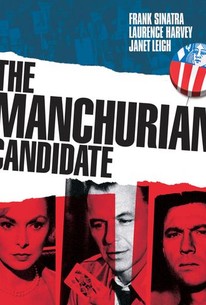 Critics Consensus: A classic blend of satire and political thriller that was uncomfortably prescient in its own time, The Manchurian Candidate remains distressingly relevant today.

Critics Consensus: A classic blend of satire and political thriller that was uncomfortably prescient in its own time, The Manchurian Candidate remains distressingly relevant today.

Critic Consensus: A classic blend of satire and political thriller that was uncomfortably prescient in its own time, The Manchurian Candidate remains distressingly relevant today.

A U.S. Army hero returns to New York from Korea, but has been mysteriously programmed by Communists to assassinate a presidential nominee, but when his Army buddy becomes suspicious of the goings on, he is on the trail to stop him.

Barry Kelley
as Secretary of Defense

Julie Payne
as Guest at Party

Lana Crawford
as Guest at Party

Evelyn Byrd
as Guest at Party

Nick Bolin
as Berezovo
View All

News & Interviews for The Manchurian Candidate

Finding Dory, The People v. O.J. Simpson, Superbad, and a Ton of James Bond Available to Stream on Netflix and Amazon Prime
24 Times The Government Overspent Your Money (In Film & TV)

View All The Manchurian Candidate News

Critic Reviews for The Manchurian Candidate

The direction and acting are good, so interest is maintained. Frankeheimer's handling of the early sequences, in which he attempts and succeeds in creating on film the corruption of the mind, is imaginative filmmaking.

Every once in a rare while a film comes along that works in all departments, with story, production and performance so well blended that the end effect is one of nearly complete satisfaction. Such is The Manchurian Candidate.

The Manchurian Candidate pops up with a rash supposition that could serve to scare some viewers half to death -- that is, if they should be dupes enough to believe it, which we solemnly trust they won't.

Its unreal characters [are] essentially relevant to ourselves in the Cold War, its extravagant fears for the future rooted logically in the recent past.

Wildly implausible though some of its razzle-dazzle incidents may seem in retrospect, this Hollywood mystery melodrama is almost continuously exciting or amusing or both.

An unstable compound of science fiction, political satire and murder which fails to explode.

"The Manchurian Candidate" is striking in its hard edge. This is not a slick, subtle dissection of modern politics. This is a fist to the face.

... what strikes me is the savvy and modern craft of its filmmaking.

Audience Reviews for The Manchurian Candidate

Beyond its subject matter this terse political thriller still holds up even fifty years later, surrounded in secrecy, with some outstanding and unparalleled performances. Set in the midst of the Cold War, this film is much less about the political and sociological aspects of its infamy and much more about the contemplative and cruel nature of an overseer in control of a single man. Instead of being about the threat of the "Oriental" this film delves into the political thrills of mind control, brainwashing, and assassination. A contingent of soldiers in the Korean War is captured by the enemy, and one of their leaders is made into a ticking time bomb. The rest of the soldiers are also brainwashed, and as their training comes back to them in a series of horrific dreams the threat from zombified Shaw (Harvey) becomes ever present. Shaw is lauded as a war hero, but his commanding officer Marco (Sinatra) knows the truth, and though he can't confront the ticking time bomb, he knows how powerful and dangerous he is. For a film made before Watergate it expertly addresses government intervention, conspiracies, and the threat overseas. That is also not to say that there isn't any Cold War paranoia attributed to this iconic film, but it's much more about the relationships that are built around Shaw, and how the bossy commanding officer eventually thaws under his nosy mother's gaze; and in memory of his former love. Both he and Marco try to foil the plan to use him as a weapon, but the film is more about Shaw pushing against his fate and finally being happy, and the conniving evil wrong doings of his mother. His mother, by the way, is played by Angela Lansbury, at the time only six years older than Laurence Harvey. In this role Lansbury plays the most diabolical, politically conniving villain in film history, and she is completely unapologetic about her crimes against the government, and even her own son, who she uses as a pawn in her elaborate game of political chess. Not only does this film address Cold War tensions, but also speaks on McCarthyism just ten years prior and on the type of people who would make such baseless accusations. This film is not only a timely political thriller but also a satire on our history and the bonds of anti-Communist propaganda that landed the US into the Cold War in the first place, a risky choice in a time when tensions were high.

Not my cup of tea, classic-movie wise.

The Manchurian Candidate may be the greatest movie I've ever seen, and I'm prompted to review it due to its rating in newspapers of 3 and-a-half out of 4 stars. That's simply unsatisfactory, so I'll do my best to justify a perfect score. Maybe most significant for me, the brainwashing plot in which the far right becomes a tool of the far left, was utterly fantastic yet made to be believable in 1962 and remains so today. Though the cold war is long over, The Manchurian Candidate remains fresh, vibrant, and relevant in today's geopolitical world. The performances by Angela Lansbury, Laurence Harvey, and Frank Sinatra are some of the most riveting ever, particularly Lansbury's. She must be the most evil mother in cinematic history. Its a nightmare fantasy, shared in the movie by Sinatra's character and fellow soldier James Edwards' Corporal Melvin, which nearly succeeds in in a communist coup d'état in America. The movie lampoons McCarthyism, displaying a wry humor, while ramping up the dramatic tension to a terrific climax. The comedy is supplied by James Gregory as the cartoonish husband/senator John Iselin and the KGB operative in New York. His interaction with the Chinese doctor is priceless. There's nothing funny about Lansbury's mother character or Harvey's Raymond Shaw, who is transformed into a brutally efficient killing machine. Sinatra, though as Maj.Marco, is the glue who holds the story together. In my opinion, this is his finest acting role. As a side note, in the karate fight between Sinatra and Henry Silva, Sinatra broke his hand leading to years of complications. Flawless in every aspect, The Manchurian Candidate sets the standard for political drama.

An expertly woven together tale of politics, family, and guilt concerning a decorated war hero (Laurence Harvey) who comes back brainwashed by the Koreans during his time fighting the war, and how he is groomed by his overbearing mother (Angela Lansbury) to help her second husband lock up the vice presidential nomination through being a political assassin. While Jonathan Demme's 2004 re-boot was ultimately a success, it comes nowhere close to the atmosphere that director John Frankenheimer harnesses in this film. This is a film loaded with darkness, dread, and paranoia around its every corner, and the result is a fascinating story concerning an intriguing plot that was really far ahead of its time. Harvey's performance is masterful, and while Frank Sinatra as the army man tracking him down is less than stellar, this whole thing is really Harvey's show, complemented by a superb supporting turn from the veteran Lansbury. The ending ratchets up the tension to an almost unbearable high, with a script that virtually nails just about everything it is aiming to tackle.