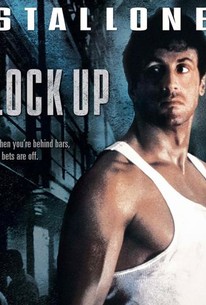 Sylvester Stallone stars in this prison melodrama as Frank Leone, an auto mechanic who just wants to play with the neighborhood kids and marry his sweetheart Melissa (Darlanne Fluegel). But when a bunch of punks kill the old man who took Frank off the streets and acted as his mentor when he was fourteen, Frank seeks out the criminals and beats them up. Frank is arrested and sentenced to six months in a minimum-security prison. Frank figures he'll serve out his time and marry Melissa, but the fates are against him. Hateful Warden Drumgoole (Donald Sutherland), who has an old score to settle with Frank, has him transferred from the minimum-security prison to a maximum-security hellhole, Gateway Prison. Drumgoole walks ominously through a fetid mist to greet Frank with the words, "Welcome to Gateway, Leone. This is Hell and I'm going to give you a guided tour."

Larry Romano
as First Base

Critic Reviews for Lock Up

The summer of 1989 was the summer of Batman, Indiana Jones and the Last Crusade, Lethal Weapon 2 and several other sizable hits, so who in their right mind wanted to waste time and money on a generic Stallone prison flick?

Director John Flynn keeps it all in check and creates a believable prison community, but the screenplay insists on cliché and idiocy to get by.

Not a bad prison movie until Stallone turns into a one-man army during a really ludicrous climax.

Lock this up in a vault and throw away the key.

Audience Reviews for Lock Up

If you ever wondered what Shawshank Redemption wouldâ€™ve been like in the 80s, this is exactly it. Sylvester Stallone always delivers the action and heart, always making his movies watchable and admirable. This isnâ€™t overly intelligent or complex, but it wasnâ€™t meant to. Itâ€™s a simple story of a man wrongfully convicted and constantly tested, you just canâ€™t avoid feeling compassion for him. Itâ€™s extremely goofy at times and almost ridiculous, but any Sly fan will find themselves happy.

Sylvester Stallone gives one of the greatest performances of his career, showing he is not an action hero but an actor and what a hell of an unforgettable performance. Donald Sutherland is brilliant, giving an intense and great peroformance. A powerful and excellent film. It's moving, thrilling, stunning and truly exhilerating. A riveting prison drama that is truly remarkable and outstanding.

Have to say right off that I can't believe the low rating for this one here because it delivers everything that a Stallone fan would want, if one is loading this into the player then surely they know what to expect !. Frank Leone only has a few weeks to go before being released from prison, he is no hard core offender, he is a loving man and is ready for a new life with his gorgeous girlfriend Melissa. During the night he is whisked away to a maximum security prison on the orders of a sadistic warden out for revenge because Leone was the only man to have ever escaped from his prison, and thus put a blemish on his record. We then follow Leone as he is pushed to the limits by crazy warden Drumgoole and all the sadistic guards under his command. He also enlists the help of resident inmate beefcake Chink Weber, and they all in turn try to break Leone at all costs to see that he never leaves prison again. There certainly is nothing here that hasn't been done before in the prison film genre, and only an idiot would expect anything other than the ending we get, but this is a Stallone movie and it's full of guts, testo macho action, and it should be noted that Sly here puts some depth to the character of Leone, he garners our sympathy quite quickly, and considering the bloke is built like the proverbial brick outhouse, it's quite an achievement. The supporting players are a mixed bunch, this is Tom Sizemore's first motion picture and he does really well with the character of Dallas, Sonny Landham is his usual scary menacing self as Chink Weber, whilst Frank McRae as Eclipse does just enough right to leave his mark. So it's something of a surprise to me that the best actor on show is actually the films weak link, Donald Sutherland as Drumgoole does overplay it to the point that he goes beyond pantomime villain, it's a real teeth itching performance that he would only outdo with Virus 10 years later, but in a film with such primal fun intentions, it has to be considered perfect. No awards here for sure, but when I watch a film about a man played by Sly Stallone in prison then I think I know what to expect, and it delivers all that I hoped for, hooray for the beefcake