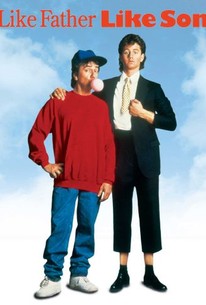 Dr. Jack Hammond (Dudley Moore) is a noted heart surgeon whose personality is switched with his teenage son Chris (Kirk Cameron) in this uninspired comedy. The ingestion of a brain transference serum is the catalyst for the comic catastrophe and the confusion that follows. Sean Astin and Patrick O'Neal co-star with Margaret Colin and Catherine Hicks. A decent idea for a comedy that has since been done better in Brian Gilbert's 1988 comedy Vice Versa starring Fred Savage and Judge Reinhold. ~ Dan Pavlides, Rovi

Chera Holland
as Nurse in Corridor

Kedric Wolfe
as Sidney, Board member

Lloyd Nelson
as Teacher in Hall

[This] is one of the most desperate comedies I've ever seen, and no wonder. The movie's premise doesn't work -- not at all, not even a little, not even part of the time -- and that means everyone in the movie looks awkward and silly all of the time.

The film doesn't really click as a satire on generational differences in manners and morals.