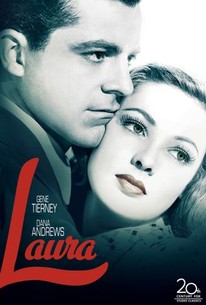 This adaptation of Vera Caspary's suspense novel was begun by director Rouben Mamoulien and cinematographer Lucien Ballard, but thanks to a complex series of backstage intrigues and hostilities, the film was ultimately credited to director Otto Preminger and cameraman Joseph LaShelle (who won an Oscar for his efforts). At the outset of the film, it is established that the title character, Laura Hunt (Gene Tierney), has been murdered. Tough New York detective Mark McPherson (Dana Andrews) investigates the killing, methodically questioning the chief suspects: Waspish columnist Waldo Lydecker (Clifton Webb), wastrel socialite Shelby Carpenter (Vincent Price), and Carpenter's wealthy "patroness" Ann Treadwell (Judith Anderson). The deeper he gets into the case, the more fascinated he becomes by the enigmatic Laura, literally falling in love with the girl's painted portrait. As he sits in Laura's apartment, ruminating over the case and his own obsessions, the door opens, the lights switch on, and in walks Laura Hunt, very much alive! To tell any more would rob the reader of the sheer enjoyment of watching this stylish film noir unfold on screen. Everything clicks in Laura, from the superbly bitchy peformance of Clifton Webb (a veteran Broadway star who became an overnight movie favorite with this film) to the haunting musical score by David Raksin. Long available only in the 85-minute TV version Laura has since been restored to its original 88-minute running time. ~ Hal Erickson, Rovi

Jane Nigh
as Secretary

Cy Kendall
as Inspector
View All

Now Streaming: Boogie Nights, American Horror Story, The Back to the Future Trilogy, And A Lot More

Will leave you drunk with delight.

Laura is still every bit as gripping in 2012.

Not only one of Preminger's greatest, but one of the great noirs.

Few movies make you feel dirtier, and so perversely grateful for the pleasure.

A highly polished and debonair whodunit.

Less a crime film than a study in levels of obsession, Laura is one of those classic works that leave their subject matter behind and live on the strength of their seductive style.

Murder, as we say, has not looked so attractive in several seasons.

A masterly mix of expressionism and street realism, this ranks among the undisputed masterpieces of German silent cinema.

What remains of Laura is not only the ability of the scriptwriters and director to keep the mystery of the film noir but the originality of the dramatic structure and the attempt to delve into the psychological characteristics. [Full Review in Spanish]

It's one of the smartest of all noirs, and thus among the most enticingly savage and dangerous.

Laura (1944) is elegance incarnate in a genre known for its hard edge, the sleekest, silkiest noir of all.

A feverish trance wrapped in a deadpan investigation

A good whodunit noir that, despite a plot weakened by contrivances (the worst being the detective falling in love with a dead woman's portrait), is memorable mostly because of David Raksin's score and the film's great dialogue (with Clifton Webb, fantastic, getting the most cynical, priceless lines).

The presumed death of a woman spurs a detective's investigation of her life and his slowly burning affection for the victim. A classic noir story shot in the brilliant shadows of forties noir cinematography with all the snappy dialogue that we come to expect of the genre, Laura is fun to watch. The actors' rapid fire delivery presents quick wits, and I always like how fast these films move. The story is as circuitous as The Third Man, but Laura is clearly not as strong because the relationship between McPherson and Laura is not as well developed as The Third Man and a greater mystique is built around Orson Welles's character; regardless, to be mentioned in the same breath as The Third Man is an achievement. Overall, if you like noir films, then this one delivers.

One of the most classic and iconic of film noirs, "Laura" is oftentimes seen as much as a voyeuristic and tranquil love story as a thriller. This comes from Detective Mark McPherson's (Andrews) infatuation with a portrait of the deceased that hangs in her own apartment. Though there isn't any declaration of love or perverted intentions, there is a subtle and brave performance from Andrews. The woman who is murdered is named Laura, and the social world that revolves around her is explored in depth as much as her life. She rises through the advertising world and finds herself on the arm of the effeminate and lavish Waldo Lydecker (Webb). Detective McPherson shifts though her world and her beaus in order to find her killer, but in a weird twist it becomes a case of cat and mouse as they wait out the next victim. This film is made up of iconic performances from Gene Tierney, Clifton Webb, Dana Andrews, and a very young and wet behind the ears Vincent Price. It's a very chilling and well-paced thriller that not only builds suspense with a well-chosen villain, a thoroughly invigorating plot, supporting characters that are both interesting and significant to the story. These characters are mostly seen through the scope of the detective, the everyman and slight gumshoe. They're elitist and cultured, especially when it comes to the very talented and distinguished Lydecker, and the group's opinions of the case and the sweet Laura are oftentimes candid and yet regal. Laura herself is an enigmatic and keen creature that is portrayed well by Gene Tierney and though beloved by the men around her, she is not shown as a slinky sex kitten nor a glowing goddess, but a humble and yet spunky reporter turned socialite. Every character, every performance proves that this film is about the actors, and they make this film beyond enjoyable.

Really, there's one word in the film-making vocabulary that explains this movie: pacing. Among the founding texts of the noir genre with crackling dialogue and a winding plot, the story's complemented by the steady Dana Andrews and the enchanting Gene Tierney in the title role. You'll be guessing until the end, and it's a roller-coaster the whole way. A can't-miss classic!