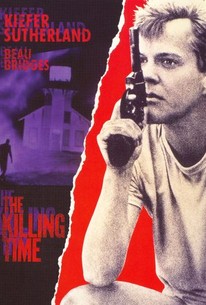 A pair of homicidal lovers is forced to match wits with an inventive psychopath who has assumed the identity of a small, coastal-town sheriff's deputy in a film noir tale of the perfect crime gone wrong starring Kiefer Sutherland, Beau Bridges, Joe Don Baker, and Michael Madsen. A mysterious stranger has killed a man who was en route to assume the role of deputy sheriff in a close-knit California coastal town, but his deadly ruse is about to lead him into murderous trap. Soon-to-be promoted sheriff Sam Wayburn (Bridges) and his mistress, Laura Winslow (Camelia Kath), have set into motion a devious plan to murder Laura's wealthy husband, Jake (Wayne Rogers), and pin the killing on the newly appointed deputy. As the incognito maniac arrives in the remote village only to realize he's not the only one harboring a deadly secret, sex, suspense, and death hang heavy over the heads of the scheming trio, leaving no way out but to fight for their very lives.

Harriet Medin
as Nell
View All

Critic Reviews for The Killing Time

There are no critic reviews yet for The Killing Time. Keep checking Rotten Tomatoes for updates!

There are no featured reviews for The Killing Time at this time.