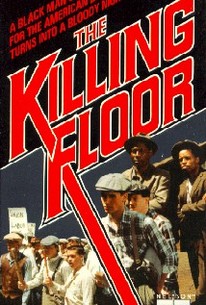 Don't pass up The Killing Floor on the mistaken notion that the film is a western shoot-em-up or cop drama. The title refers to that special area in the Chicago stockyards where the cattle are slaughtered (yes, we know: yeccch. But it happens). The story relates the true-life attempts to set up an interracial union at the stockyards during World War II. Nothing happens in the film that is not logical or understandable, so don't expect a last minute mano-y-mano duel fought with meat cleavers or some such. Well (and sometimes graphically) produced for PBS' American Playhouse, The Killing Floor stars Damien Leake as a southern black sharecropper seeking a better life in Chicago.

Wandachristine
as Woman in Bar

Michael Dunn (I)
as White Youth

Joe Krowka
as Militiaman No. 2

Howard Elfman
as Militiaman No. 3

Critic Reviews for The Killing Floor

Chicago film history remains the richer for its existence and its recent digital restoration.

A revelatory historical drama that offers a powerful template for social analysis in fiction.

Racism, racial violence and ideological divides abound. Made for PBS' "American Playhouse," the film is a perfect double bill with Charles Burnett's "Killer of Sheep" (1973)

A well-researched historical drama, with a Steinbeckian sense of economic and racial justice.

Audience Reviews for The Killing Floor

There are no featured audience reviews yet. Click the link below to see what others say about The Killing Floor!