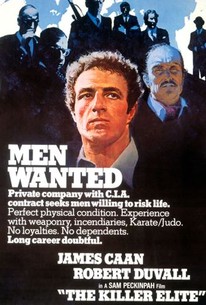 This second-string Sam Peckinpah action film features James Caan as ex-CIA agent Mike Locken, who has retired due to injuries received at the hands of his ex-partner George Hansen (Robert Duvall). But Mike is lured out of retirement to protect Yuen Chung (Mako), an Asian political leader. There's a contract out on Yuen Chung's life -- and the killer assigned to rub out Yuen Chung is none other than Mike's former partner, George Hansen. The confrontation between the two leads to a showdown on a decaying naval vessel between Mike's forces and a group of ninja warriors.

Sondra Blake
as Josephine
View All

Critic Reviews for The Killer Elite

Sam Peckinpah knows how to make movies but perhaps he has forgotten why.

The Killer Elite is directed and acted with a certain nice style, but it puts us through so many convolutions of the plot that finally we just don't care.

The result is a strangely dissonant and compelling entertainment, an unsettling criss-cross of Chinatown Nights' fantasy and dyspeptic meditation on figures set firmly in their contemporary landscape.

It is not as violent as usual, simply boring, confused and interminable.

Unfortunately, once the aggression is unleashed, it ends up devouring its protagonists just like life itself. [Full Review in Spanish]

It's right in tune with the cinema of paranoia and conspiracy that bloomed in the seventies while also jumping on the martial arts craze with Caan taking on ninja warriors ...

A fable of self-romanticizing paranoia, acknowledged as a splendid private joke played from deep within a corporate potboiler

Misunderstood at the time of its release, this is essentially a droll parody of espionage thrillers with plenty of chases and shoot-outs presented in an absurdist, mocking tone by director Peckinpah.

Audience Reviews for The Killer Elite

With a rather nice pedigree this 1975 film, directed by Sam Peckinpah and starring Robert Duvall and the then hot property James Caan, held the promise of something worth watching. Its quirky "hip" 70's script and some truly odd moments of absurdity (and some rather bad acting on the part of Bo Hopkins) makes this film come up just a bit short of the mark. As a brief bit of intro graphics tells us, the Killer Elite are a group of mercenaries - a private company who are usually hired by the CIA when they don't want any blowback. OK, I can surely buy that, and it sounds almost prescient coming from 1975. As the credits role (another affectation of the 70's) we see hands running wire and placing plastique. Then the screen widens and we see Caan, and Duvall jumping into a car along with their "sheep" (think of the pair as shepherds, protecting the sheep until sheering). For some unknown reason the building blows up, and the trio make a getaway, riffing bravado and machismo all the way. They make their way to a safe house, filled with prostitutes (ok, so far you have a gratuitous explosion, and now gratuitous T&A). Finally, Duvall and Caan are given instruction to take their sheep to another hideout, where an extraction will be made. Before their sheep can be turned over to the paying party, things go terribly wrong and Caan gets capped in both elbow and knee. Peckinpah decides to spend considerable film time showing the operating room and then the physical therapy Caan suffers through. Of course this allows Sam to introduce a love interest (the therapist), as well as setting up a scene in which the two heads of the "company" inform him that his partner has gone rogue and that, oh by the way, due to his injuries he'll be given a demotion to a desk job. Caan remains glib throughout this ordeal, only showing his frustration when he yells at a visitor to leave him alone after the visitor witnesses Caan falling while doing PT. The visitor, by the way, plays a substantial part later in the film - so this introduction to the character was indeed an odd one. In a nod to the kung fu rage of the early 70's, Caan's recovery involves him turning to martial arts, becoming especially adept at using his cane (hmm, Caan's cane, or is it Canes' Caan - or maybe I'm still hearing Will Shatner yelling Kaaaaaaahn). This emphasis on fu fu is important as the CIA contacts the agency and asks for a team to shepherd a couple of Chinese politicos for a couple of days until they can return to China (why they came to SF in the first place, and why they will return is a Byzantine tale that frankly makes little to no sense whatsoever). Caan is told by his handler that his former partner is now working for the "other side" and will be gunning for the sheep. Caan sees this as his opportunity for redemption, so assembles a team, which includes the aforementioned Bo Hopkins as a marksman with a penchant for pulling the trigger, and Burt Young as the politically and socially savvy driver. The two are polar opposites - Burt so quirky and yet a natural actor, where you can believe every corny word or mannerism that emanates from him; whereas Bo is wooden and totally unbelievable. There are action scenes galore - some pretty well filmed while others... well, let's just say that Peckinpah unintentionally was paying homage to 50's westerns. There are car chases and an absurd scene involving a motorcycle cop, as well as some serious inferences of double crossing and double dealing - the former a distraction and the latter holding our interest. It all leads up to a climatic scene late at night at the SF docks, which works in an odd, rather stylized way. The film could have ended there, but Sam decides to add yet another double cross that involves Caan transporting his sheep to "the mothball fleet" in Suison Bay. To those not acquainted with the San Francisco bay area - the mothball fleet is just that - row upon row of rusting WWII transport ships all at anchor - the Navy decommissioned them and now has no idea of what to do with them. Anyhow, this gives Sam the opportunity to do some nice camera work, but the following fight between several opposing forces and involves ninjas as well as a calling out and sword fight between the two Chinese political rivals, is way over the top. I suppose there was supposed to be a message in all this somewhere about mercenaries (or soldiers in general) who were "just following orders" - but it gets lost amongst all the odd characters and jargon. There are some good, if dated moments in this film, especially the on location shots of a 1975 San Francisco (I just love the billboard advertising the AMC Pacer!), but I found the direction a bit lacking surprisingly, and the script simultaneously too clever and too ridiculous, caught up in minutia while overlooking some glaring holes and patchwork add ons. One example is a little scene where Bo, the marksman and gun expert points out that a guy dressed up as a cop isn't really a cop because he was holding a Glock and he knew that SF cops ALL used 38 Caliber Colts... To which I was thinking - all but ONE cop, who always carried a 44 Magnum - ah, gotta love the 70's.

You know a movie is dated when the most notable product placement is an AMC Pacer.

There's some good action in this movie, but the story's not so great, and it's pretty boring for the most part. At least there are some good actors in it.

"It's a good show. It's not a great show, but it's a good show." That just about sums up Peckinpah's The Killer Elite. The first time you watch it, it seems convoluted as hell; second time, you wonder where all the plot went. Betrayed and grievously wounded by old 'buddy' Robert Duvall, James Caan's CIA sponsored agent claws his way back to fitness and sets out for revenge. Despite all the crosses and double crosses, the story is essentially a very simple one, but Peckinpah disguises this fact with dazzling editing, lots of cod philosophical dialogue and minimal exposition. As with The Osterman Weekend a few years later, the material isn't really worthy of the director's talent, though he does what he can with it and, consequently, the film is about as good as it could possibly be. There are several tense and brilliantly executed set pieces, plus good character performances from the likes of Arthur Hill, Burt Young and Bo Hopkins. On the downside, the film has not aged well, it's occasionally silly and it's vaguely misogynous.