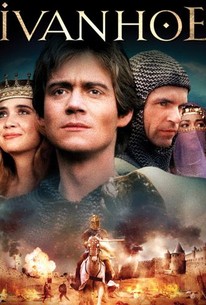 The classic adventure novel by Sir Walter Scott, which covers the same ground as the various Robin Hood legends, becomes this impressive television production, boasting a well-heeled British cast, a robust pace, and solid production values. Wilfred of Ivanhoe (Anthony Andrews) is a young Saxon knight of 12th century England. Returning home from fighting in the Crusades alongside King Richard the Lionheart (Julian Glover), Ivanhoe finds that the nation is now under the dictatorial thumb of the king's brother, Prince John (Ronald Pickup) and the prince's thuggish Norman cohorts. He is also dismayed to learn that his longtime love, Lady Rowena (Lysette Anthony), has been betrothed to another man. Determined to restore throne and country to Richard, the courageous Ivanhoe has soon run afoul of those in power, though a few rebellious types like Robin Hood (David Robb) are on his side. Ivanhoe also finds love again, with the lovely Jewish girl Rebecca (Olivia Hussey), though she and her wise father Isaac of York (James Mason) face Norman persecution for their religious faith. Ivanhoe also finds a deadly rival in the cynically twisted knight Brian de Bois-Guilbert (Sam Neill).

James Mason
as Isaac of York

Anthony Andrews
as Wilfred of Ivanhoe

Michael Hordern
as Cedric the Saxon

Julian Glover
as Richard I the Lionheart

Robert Russell
as Leader
View All

Despite its flaws, this 1982 TV movie offers an enjoyable version of the Sir Walter Scott romance.

To date, the best screen version of Ivanhoe… the whole cast is excellent.

There are no featured audience reviews yet. Click the link below to see what others say about Ivanhoe!