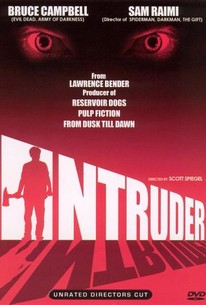 Gory slasher mayhem from Evil Dead co-writer Scott Spiegel, this claustrophobic thriller is set entirely in a small supermarket, whose owner is preparing to go out of business. This doesn't sit too well with the film's resident maniac, who busily butchers the night crew using the tools of the trade (hooks, axes, knives, power tools and so on). The victims include Spiegel's pal and Evil Dead director Sam Raimi as the butcher-shop buffoon who meets a nasty end on a meathook; even Raimi's favorite lantern-jawed star Bruce Campbell puts in an eyeblink cameo as a brutish cop. Though the film sports some clever, audacious gore effects from KNB FX Group, most of this footage is absent from Paramount's home video print.

Greg Nicotero
as Townie In Car

Intruder's effective due to the fact it's one of the slasher sub-genre's best offerings from the 1980s and leans towards a gory capitalist critique.

A hidden slasher gem that manages to make use of its single setting story.

If you've seen damn near every slasher movie, Intruder is a pleasantly solid entry in the genre. GREAT gore and kills.

Scott Spiegel's Intruder is one of the 1980's last great Slasher flick that came out at the end of the decade. While many Slasher franchises were recycling ideas, and many countless ripoffs were filmed, Intruder is one of the better of the bunch. Of all the slashers that in the last years of the 80's, Intruder has got to be the most original, the most grotesque and overall the best of the decades most popular genre of horror. Intruder was directed by Scott Spiegel who previously worked with Sam Raimi on Evil Dead 2. Like I previously stated, Intruder is a great slasher film, and is one of final slasher greats of the 80's. The film boasts some very impressive kills scenes with plenty of blood and gore to appeal to the most die hard Slasher film fan. The key aspect of the film is the special effects, I personally think that these are some of the best special effects I've seen in a slasher film in quite some time. Like I said, the kills are great and will definitely appeal Slasher fans. There's also a good mix of suspense and humor in the films plot, and Scott Spiegel has crafted a solid Slasher film. Intruder is a fine Slasher film that signaled the end of 1980's slashers. The film is great, and if you've seen the countless early 80's Slashers, and want something refreshing, then this is a great film to watch. This is a definite Slasher classic that is a must see for every horror fan, and with great gore effects, and awesome kills; it really makes Intruder a film that separates itself from most Slashers. This film is an awesome experience for horror fans.

I was actually quite surprised by how well-made Intruder turned out to be when I finally got around to watching it. In the back of my mind, I pictured a grainy 16mm movie with hardly any real actors, lots of gore and great ethusiasm. That's actually a nearly perfect description for the film (minus the 16mm part), but the difference is that these people know what they're doing. There's some great visual gags and moments, as well as a very nice score that's put to effective us. The gore and special effects are wonderful, courtesy of the KNB guys (before KNB was established). In particular, the band saw scene, which is the strongest effect in the entire film. The acting isn't amazing or anything, but it works in the context of what it is. I think it's rather original to set a horror movie entirely in a grocery store for the length of the film. I can't say whether or not that's a first, but it works well. There are several things about the movie that don't make sense, as there are plot holes abound, but it's effective nonetheless. Definitely a great slasher movie.

Worth watching for completists and rabid fans of the Raimi brothers and Bruce Campbell, but ultimately it's nothing special.