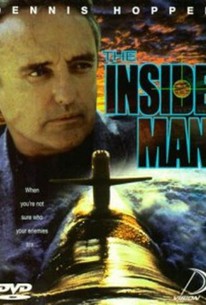 The Inside Man Photos

The internationally produced The Inside Man was inspired by a true story. In 1981, a Soviet submarine ran aground on the coast of Sweden. The sub was carrying a hush-hush laser search device, which promptly vanished. In this 1984 recreation of the incident, Dennis Hopper is cast as the CIA agent assigned to track down the missing laser. Aided by young assistant Gosta Ekman Jr., Hopper finds himself in a life-and-death struggle with a variety of foreign agents, each with his own agenda. Hardy Kruger co-stars in this rugged adventure yarn.

Leif Ahrle
as Minister of Defense

Per Mattsson
as Sven

Carl-Ivar Nilsson
as Naval Officer I

News & Interviews for The Inside Man

View All The Inside Man News

Critic Reviews for The Inside Man

...will attract the average moviegoer looking for some thrills but the real audience is the film buff who wants something more than the usual, generic Hollywood action fare.

Audience Reviews for The Inside Man

The only thing that makes this movie a bad film is the rotton acting by Dennis Hopper, its one thing not to remember your lines but another to not be able to read que cards with a more meaningful approach. 2 Stars

The Inside Man Quotes