The Hound of the Baskervilles1959 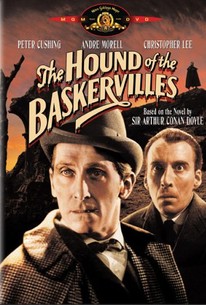 The Hound of the Baskervilles Photos

Sherlock Holmes (Peter Cushing) and Dr. Watson (Andre Morell) are summoned to investigate the murder of Sir Charles Baskerville. The family seems to be cursed because of previous ancestral crimes, and it is assumed Sir Henry may suffer the same fate as Sir Charles. The legend of the curse also tells of a murderous canine that stalks its victims in the shadowy moors that surround the Baskerville estate. This film is the first color feature of Sir Arthur Conan Doyle's legendary sleuth.

Critic Reviews for The Hound of the Baskervilles

There has been no shortage of interpretations of Conan Doyle's great detective over the years, but, with apologies to Benedict Cumberbatch, Peter Cushing remains one of the greatest.

Cushing is a stellar Holmes, nailing his balance between arrogance and charm, and adding just enough menace to give the proceedings that certain sense of horror. It

The screenplay is unimaginative, staging and direction are inexpert, and the performances dull, with Peter Cushing making a tiresomely mannered and too lightweight Sherlock Holmes.

This is my favorite of the movies adapted from Sir Arthur Conan Doyle's novel, and the first one in color.

Peter Cushing is perfectly cast as the great detective, the very embodiment of science and reason (which also made him such a great Van Helsing in the Dracula series)...

Cushing is splendid as Holmes -- perhaps less eccentric than other screen Holmes but certainly no less committed -- while it's nice to see Lee in a rare good-guy role.

Being a Hammer production, the cinematography is stylish and just gaudy enough, with that distinctive Hammer gothic plumage...

This classic is no dog!

One of the best of all Sherlock Holmes films

Audience Reviews for The Hound of the Baskervilles

Hammer Films rally nailed it with this outstanding interpretation of the Conan-Doyle classic mystery. Just as the studio revolutionized the classic horror movie genre with its Dracula, Frankenstein, and Mummy movies, their fresh, all-color, and slightly gory (for the 1950s) version of this well-trod ground delivered a much needed update for Sherlock Holmes and company. Hamer's actors are brilliant here, in my opinion superior to the 1940s serials with Basil Rathbone. Peter Cushing is great, Andre Morell is also, and Christopher Lee delvers a character fans wouldn't recognize. Italian-born Marla Landi was a fortunate find; her accent and crazed mannerisms bring her plotting temptress character to life. The direction and especially cinematography is typical of Hammer, brilliant. The deviations from the book's plot, which you can read about in Wikipedia, only enhance the film. Often purists harshly critique film versions of famous novels, but no one should find any fault here. The film's climax, which I won't reveal, I believe improves on the original. In summary, Hammer's 1959 interpretation of this classic is one of the studio's best films and one of the best Holmes film adaptations. Highly Recommended!

A Hammer Films Production, which is to say a little garish, loud, and predictable. But never dull.

Fantastic casting and superb direction make The Hound of the Baskervilles not only what I'm sure is one of the best Sherlock Holmes adaptations (actually, I'm nowhere nearly qualified enough to make that call -- this is the second Sherlock Holmes movie I've seen and I challenge you to guess what the first one was...) but one of the better Hammer productions. Given the talent involved, The Hound of the Baskervilles is everything you'd expect. Peter Cushing and Andre Morell are magnificent as Holmes and Watson and despite Christopher Lee's name in the cast, I wasn't too distracted by waiting for him to go bad and wasn't disappointed (um, spoiler alert) when he didn't. Really good stuff...

I saw this movie on TV, I'm sure it's confusing enough without having the commercials interrupting all the time, but I really had a hard time following it. It wasn't bad, though, there were good actors too, it's just that the story is confusing throughout.

The Hound of the Baskervilles Quotes