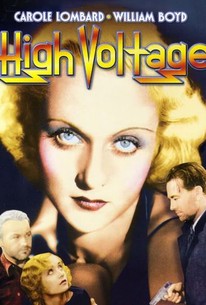 In one of her first talking pictures, Carole Lombard played a girl crook falling in love with a handsome lineman (William Boyd) while marooned during a snow storm. Crossing the High Sierras in a bus, a group of travelers find themselves stranded in a small village and at the mercy of Bill Dougherty (Boyd), a lineman who apportions them a small amount of food. Despite warnings from detective Dan Egan (Owen Moore), Billie Davis (Lombard), the girl crook, falls in love with Bill, who turns out to be an escaped convict. Briefly planning to flee, Bill and Billie decide to serve their sentences and share a happier future together. High Voltage was produced by Pathé and featured blonde newcomer Diane Ellis as a young girl en route to her wedding. Ironically, Ellis died less than a year later from a rare tropical disease while honeymooning in India.

Billy Bevan
as Gus the driver

There are no critic reviews yet for High Voltage. Keep checking Rotten Tomatoes for updates!

Creaky antique that defeats even the great Lombard.