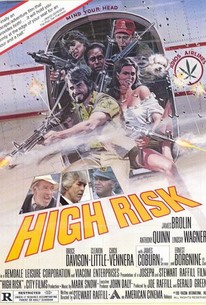 Stewart Raffill directs the high-action comedy caper High Risk about a four-man band of theives trying to pull off the perfect crime. Stone (James Brolin), Tony (Chick Venera), Dan (Bruce Davidson), and Rockney (Cleavon Little) hire two inept airplane pilots and plot a major heist. The plan is to rob a mansion in South America belonging to the wealthy drug lord Serrano (James Coburn). After they break open his safe and steal five million dollars, they try to escape the jungle while being followed by the Columbian army and a group of bandits led by Mariano (Anthony Quinn). Ernest Borgnine appears in a brief cameo.

Mario Valdez
as His Assistant

Álvaro Carcaño
as Gays in Jail

Paco Morayta
as Gays in Jail

Alejandro Camacho
as Obediente
View All

There are no critic reviews yet for High Risk. Keep checking Rotten Tomatoes for updates!

I just couldn't identify with the main characters, I wanted the bandit guys to get the money in the end instead somehow. This just goes to show how greedy Americans are, I guess? Overall I didn't really enjoy this movie.

The number of big name stars in this movie are amazing. James Brolin, Anthony Quinn, Lindsay Wagner, James Coburn, and Ernest Borgnine. After doing some research I found out this movie ran up against Indiana Jones both opening at the same time. No wonder it was never heard of. I found it in a 10 Movie Crime Wave Collection by BCI. It was a good movie in 1981 but in 2011 its something you expect to see at 3am in the morning. About 4 guys who plan on going into Mexico to steal 1 million dollars from James Coburn, without hurting anyone, figure those odds even in 1981. After their little robbery the are chased and hiding out when the run into Anthony Quinn who plays the leader of a bunch of rebels who also want the money. Kind of a crime drama with some comedy, not a good mixture in this film. 3 stars.

It had the components there to be a cheese classic, but it kind of got old along the way. Still, you have to appreciate how it so gleefully avoids things like logic or realism for the sake of its "story". Whatever happened to Cleavon Little, anyway?