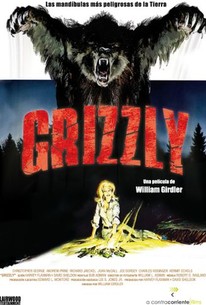 This ecology-themed horror movie took its inspiration from the success of Jaws and moved that film's man-versus-nature conflict from the seaside to the forest. The plot of Grizzly focuses on Mike Kelly (Christopher George), a forest ranger whose peaceful tenure over a forest housing a busy nature lodge is interrupted by the arrival of a very deadly and hungry 15-foot grizzly bear. As the bear starts killing rangers and campers, Park Supervisor Charley Kittridge (Joe Dorsey) tries to cover up the problem and tries to keep Kelly from acting in a way that will cause public suspicion. Finally, Kelly decides to do what is right and teams up with macho pilot Don Stober (Andrew Prine) and eccentric naturalist Arthur Scott (Richard Jaeckel) to hunt the grizzly down on its own turf. Grizzly was roundly panned by critics for its slavish, blow-by-blow imitation of its more sophisticated model, Jaws, but its gruesome shock power made it a major hit with audiences around the world. Director William Girdler followed this success up with another ecology-themed shocker in Day of the Animals, and the film's producers made a still-unreleased sequel, Grizzly II, which provided early roles for Charlie Sheen and George Clooney.

Mary Ann Hearn
as A Victim

"Grizzly" is not only clumsily plotted, photographed and edited, it is also downright rude when it insists on showing us the bear lopping off an arm or decapitating a horse.

"Grizzly" finds its own footing after introductions are made, doing a fine job transitioning the shark role to an enormous bear, while star Christopher George does his best to keep panic in the air.

The meager plot follows the bear as it lumbers about slicing up tourists--and not just to get their picnic baskets--pursued by a heroic forest ranger (George) and a naturalist (Jaeckel).

Marked as a rip-off of Spielberg's classic Jaws, Grizzly certainly and desperately fails in its intent and overall, you can spot the similarities throughout.

As a drive-in-level guilty pleasure of the most obvious and brainless variety, Grizzly is quite a bit of good, campy fun.

A serviceable Jaws ripoff that was perfect '70s drive-in fare.

Rich Cline
Shadows on the Wall
View All Critic Reviews (9)

Grizzly has got the reputation of being one of the first of many Jaws rip offs. This tale of nature gone wild is one enjoyable horror film. If you can forget that this is a rip-off of Jaws, then you're sure to enjoy this awesome horror film. Grizzly is one of those Cult films that you're just happy to rediscover. Though it was inspired by Jaws, Grizzly is gem of a film. The acting is pretty good considering that this is a low budget film, and the bear attacks are quite impressive too. What I like about the film is that they used a live bear to make the film. Grizzly felt very realistic. I really enjoyed the blood and gore. I felt that Grizzly is very underrated. Yes, it is a rip off of Jaws, but that doesn't mean it's a bad film. The film quite good and it's a very impressive film with a good enough, but predictable plot. In the end, does it really matter? The Grizzly keeps the body bags full, and there's plenty of carnage on-screen to appeal to horror fans. Grizzly is also one of the better Jaws rip offs along with Piranha. Some people have said that the acting was awful, and the dialogue was bad, but I actually found the performances and dialogue to be quite good. The star of this film is of course, the bear. Grizzly is a fun, entertaining film that delivers good chills and a good time. For a Jaws rip-off, this is a great, obscured gem that Cult horror fans will relish.

Another in the long line of 'so good it's bad' movies, this complete and utter Jaws echo is about as much fun as you could hope for from a killer grizzly bear movie. The highlight of the thing for me would be the bear decapitating a horse. I laughed extremely hard at that. The whole thing is cliche'd, over the top and just horrible - but damn is it entertaining. If you sit back and try not to take this seriously, you'll have a good time.

Jaws with a bear (complete with exploding antagonist finale) except not nearly well as acted, directed, written or executed.

Grizzly is directed by William Girdler, written by Harvey Flaxman & David Sheldon and stars Christopher George, Andrew Prine & Richard Jaeckel. Story sees a giant Grizzly Bear terrorise campers and hikers at a state park. The head park ranger sets about capturing and killing the beast but he's met with resistance from his superior and troubled by the number of glory hunting hunters who descend upon the park. If you pardon the pun, Grizzly was a monster surprise hit of 1976. Made for a paltry $750,000, it went on to make over $39 million Worldwide. It may well be a "Jaws" coat tail hanging copycat (and it unashamedly is), but credit where credit is due, William Girdler & David Sheldon spotted an opening in the market and got in there in a blaze of blood, grue and roaring ferocity. It was also one of the first of a number of "Jaws" knock offs, and while it's silly at times, and beset with bad acting, it is, however, one of the most popular and fun cult horrors of the 1970s. Filmed on location in Clayton, Georgia, Girdler's movie knows exactly what it's about. Keeping it relatively free of extraneous and expositional filler, Girdler knows (and so does the cast) that the bear is the star of the show; well more to the point, that the bear shredding and chomping down on humans is the star of the show. And so it goes, the humans-except for our hero protagonist (George) & wise sage naturalist (Jaeckel)-are annoying and lining up to be either bear lunch or to be proved wrong. And what fun it is. It's the sort of film that scared us to death as kids, and now makes us smile as adults. The film has proved popular enough over the years to warrant a double disc DVD release. A release that wouldn't be out of place for some critical Oscar winning darling I might add! Now available in a quite lovely anamorphic widescreen presentation (2.35:1), Girdler's (and cinematographer William Asman) shooting around Clayton is very pleasing on the eye. Sure some of the inexperience of the editing and lighting departments exists, and the budget restrictions are now even more evident (check out the blood), but Grizzly actually does look rather nice. The extra disc is chock full of goodies, with the "Jaws With Claws" featurette enjoyable and showing the makers to be very tongue in cheek about the whole thing. So, a must for B movie creature feature fans who don't mind a bit of camp on their cheese sandwich then. Those looking for Alien or Gorilla's In The Midst obviously need not apply.