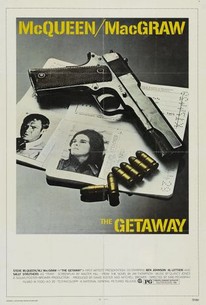 Critics Consensus: The Getaway sees Sam Peckinpah and Steve McQueen, the kings of violence and cool, working at full throttle.

Critic Consensus: The Getaway sees Sam Peckinpah and Steve McQueen, the kings of violence and cool, working at full throttle.

In Sam Peckinpah's version of Walter Hill's script, from Jim Thompson's novel, an ex-con and his wife go on the lam after a Texas bank heist. Denied parole after four well-behaved years, Doc McCoy (Steve McQueen) sends his wife Carol (Ali MacGraw) to dirty politician Jack Benyon (Ben Johnson) to get him out of prison. Carol secures Doc's freedom, on the condition that he does one more bank job for Benyon. Doc and his accomplices Rudy (Al Lettieri) and Jackson (Bo Hopkins) get the cash, but Doc soon discovers how Rudy intends to keep it all for himself and how Carol convinced Benyon to get him sprung. While Rudy hijacks a veterinarian and his wife (Sally Struthers) to take him to get Doc in El Paso, Doc and Carol make their own embattled way south with the money, threatening to desert each other before reaching a trash dump rapprochement after a harrowing garbage truck episode. All sides converge in El Paso for a shootout, but trust a happily married old-timer (Slim Pickens) to help Doc and Carol have a future. With violence shot in his trademark balletic style, Peckinpah does not hide the damage that Doc can do, whether to a cop car or an enemy. Still, as in such other morally relative outlaw movies as Bonnie and Clyde (1967) and Peckinpah's western The Wild Bunch (1969), Doc may be a criminal and killer when necessary, but his and Carol's loyalty to each other elevates them above their crooked milieu. With its non-traditional traditional couple played by the then hot (and notoriously adulterous) stars McQueen and MacGraw, The Getaway was a substantial hit. It was lackadaisically remade with Alec Baldwin and Kim Basinger in 1994. ~ Lucia Bozzola, Rovi

Raymond King
as Boys on Train

Ivan Thomas
as Boys on Train

Brick Lowry
as Parole Board Commissioner

Stacy Newton
as Stacy
View All

News & Interviews for The Getaway

View All The Getaway News

Critic Reviews for The Getaway

The action and the violence of The Getaway are supported by no particular themes whatsoever. The movie just unravels.

The Getaway is a big, glossy, impersonal mechanical toy. It's like one of those devices for executive desks, with the stainless steel balls on the strings: It functions with great efficiency but doesn't accomplish anything.

It's fast, furious, full of shoot-outs and car chases, lovely little side-forays into suspense and irony, and tidbits of genuine humor.

...ultimately comes off as an above-average thriller that's elevated by the inclusion of several electrifying sequences and an expectedly charismatic turn from Steve McQueen.

The Getaway scores a triple play: It's a good character examination, a good relationship study, and a good action flick.

Tough as nails and very effective.

simply too contrived to be taken seriously

A tough crime drama with a steely McQueen performance and the usual quota of Peckinpah violence.

Audience Reviews for The Getaway

Steve McQueen and Ali Macgraw light it up in this unusual tale wherein the bad guys and gals are the best thing going, in true Peckinpah style. Vibrant with charisma, this feels as fresh as if they shot it yesterday. Simply loved this.

Sam Peckinpah's visceral direction was unique in the sense that he always managed to craft pictures that were riveting, tense, brutal and exciting. Often imitated, but never matched, Peckinpah's was a director that knew how to successfully craft a picture that struck a chord with its audience, and he always managed to steadily build up the tension. I've previously only seen Straw Dogs, and that film was a highly memorable picture that was hard to forget. That is the case with The Getaway, managing to be a riveting cinematic experience with effective, pulse pounding direction from a standout director and elevated by a powerful cast that is headed by the late great Steve McQueen, who delivers one of his finest performances of his career. What makes the Getaway work so well is the taut direction, the steady pace of the story that takes its time to set things up so that you are drawn more and more into the film, and the great performances. The Getaway manages to be a riveting heist picture, one that ranks among the finest in the genre, as well as being one of the classics that has yet to be matched. Peckinpah is a skilled craftsman when it comes to making great movies, and with this film, he pulls out every trick to create something that is highly engaging from start to finish. The Getaway is a tense, action packed thriller, one that is a standout picture well worth your time. I very much enjoyed this picture and I highly recommend this film to anyone looking for a blistering heist film to watch. With effective direction, and memorable action and phenomenal performances The Getaway is one of the finest heist films ever filmed. Sam Peckinpah is a director who can successfully construct something memorable using the simplest of ideas. If you break down this picture, it's that complex, but it's a film that is brilliantly executed due to a sharp script, great cast and sharp direction.

Peckinpah's action flick is well made and original though not one of his best.

Filmed on location across various parts of Texas this is the story of Carter "Doc" McCoy (Steve McQueen), a bankrobber who gets released from prison after his wife Carol (Ali MacGraw) does whatever is necessary to make it happen. As per part of the deal she makes, the two of them, plus a couple of others, are pulled together to pull off a major job, one that could very well be the last one McCoy ever needs to pull. Things go awry, and, following the botched job, the rest of the films follows the characters as they attempt to make their escapes. Walter Hill wrote the screnplay, and based the material off of a novel by Jim Thompson. Sam Peckinpah took the reins as director, and Quincey Jones handled the music. Being that this was released in 1972, it easily fits into the canon of tough, gritty crime pictures common for the period. It;s a good solid yarn and (I think) deserves to be better known and more appreciated. The cast is ptetty good, and they give some decent performances. The characters, despite beign criminals, are somewhat likeable, even though they don't always do nice things. Of course though, It's McQueen, the King of Cool, so he's pretty hard to dislike in general. The action scenes are well done, and I enjoyed some of the humor as well, even though I wasn't expecting it. My only real complaints are the choppy editing and the freeze frames during the opening credits. Those get a little distracting and annoyed me. Also, I'm not real big on how they handled the sidestory involving Al Lettieri's character as he makes his escape. I mean, he does a good job, as does Sally Struthers, I just think it could have been handled better as the way it is now just seems out of place. The music is fairly decent, but some of it seemed inconsistent and not uniformly strong. Other than all that, this is a fine motion picture. It's cool, it's gritty, and McQueen is a bad ass. Do yourself a favor and check this out. It was remade in 1994 with an equally impressive cast, but, even though i haven't seen it yet, I have a feeling it'd be best to just stick with this one.