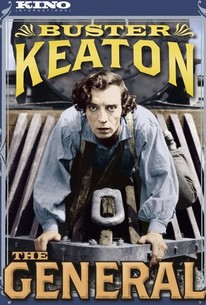 Buster Keaton plays Johnny Gray, a Southern railroad engineer who loves his train engine, The General, almost as much as he loves Annabelle Lee (Marion Mack). When the opening shots of the Civil War are fired at Fort Sumter, Johnny tries to enlist -- and he is deemed too useful as an engineer to be a soldier. All Johnny knows is that he's been rejected, and Annabelle, thinking him a coward, turns her back on him. When Northern spies steal the General (and, unwittingly, Annabelle), the story switches from drama and romance to adventure mixed with Keaton's trademark deadpan humor as he uses every means possible to catch up to the General, thwart the Yankees, and rescue his darling Annabelle -- for starters. As always, Keaton performs his own stunts, combining his prodigious dexterity, impeccable comic timing, and expressive body language to convey more emotion than the stars of any of the talkies that were soon to dominate cinema. ~ Emru Townsend, Rovi

Richard Allen
as His Son

News & Interviews for The General

Exclusive: The World of WALL-E
AFI Announces Top 100 Movies of All Time … Again

View All The General News

Critic Reviews for The General

In these times when all risk is assumed by CGI effects, Keaton's squealing funny, exquisitely timed, death-defying leaps are all the more breathtaking.

The film boasts the most sustained passages of virtuoso slapstick genius Keaton ever shot, and an unflagging momentum that lets it get away with being a reel longer than most of his best-known pictures.

A hilarious comedy and a thrilling action film. The General has it all.

Spectacular chases, fires and explosions are captured with fluid camerawork. There are no stunt doubles for Keaton and of course no digital effects.

The result is a flop.

One of the greatest of all silent films.

The movie is one death-defying stunt piece after another, and each is jaw-dropping by even today's standards.

The moments with the cannon, or that of the bridge - the most expensive gag in the history of cinema - are those that are not forgotten. [Full Review in Spanish]

The General is one of the funniest, most ingenious, and gosh-darn exciting films you will ever see in your long and happy life.

features gags that are as much artful exercises in stuntwork and timing as they are orchestrated attempts at humor, and the fact that they work so well as both is testament to Keaton's brilliance as a filmmaker and performer

Audience Reviews for The General

Very simply a genius execution, filled with variety, purpose, and most of all, humor, as the diminutive hero does his utmost to stand amongst the big boys as wartime calls. Unbelievable stuntwork, of course, that'll have you wondering aloud, but as well, a treatment of the heroine that only some eighty years ahead of its time. A train as the third major character, two armies battling it out, and a train crash that couldn't've been faked. Simply incredible stuff.

The only problem is that Keaton was in the wrong side of the war.

A true classic in every sense of the word, hysterically funny like few others and featuring some of the most exciting locomotive chases ever filmed, as well as an epic-scale production, a beautiful score and a cinematography in sepia that feels like a travel in time.

A humorous, beautifully shot and constructed silent film concerning a railroad engineer (Buster Keaton) who wants badly to serve the Confederacy in the Civil War but is turned down. When his train and girl are both stolen from him by Union spies he is compelled to try to rescue both. While not as skilled in the realm of slapstick humor as the great Charlie Chaplin, Keaton proves himself to be a capable comedian. It is not as moving and memorable as "City Lights" or some of Chaplin's silent films, but this is still a really well done movie that is consistently funny and entertaining, and it shows that it has a heart as well given its clever finale.