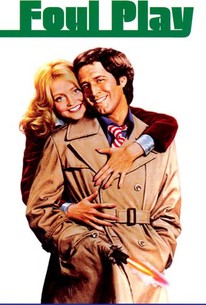 As he did in his screenplay for Silver Streak (1974), writer/director Colin Higgins mixes life-and-death melodrama with broad slapstick in Foul Play. Goldie Hawn stars as Gloria Mundy, a recent divorcée whose attempts to start life anew in San Francisco are bollixed up when she is inadvertently swept up in an assassination plot against the Pope. Offering sometimes dubious aid and comfort to Gloria is bumbling federal agent Tony Carlson (Chevy Chase). The film's comedy ranges from the farcical seduction efforts by musician Stanley Tibbets (Dudley Moore) to the zany, gag-filled car-chase finale. Foul Play features character actors Rachel Roberts and Eugene Roche as villains, Burgess Meredith as a martial arts-happy landlord, and Billy Barty as a long-suffering religious bookseller. It also packs in a memorable "throwaway" gag involving a profane Scrabble game played by sweet little old ladies Queenie Smith and Hope Summers.

Jane Shaulis
as Katisha
View All

One recognizes the romantic comedy impulse behind the sexual sparrings of Hawn and Chase. It's the execution that leaves everything to be desired.

Unsatisfactory as a whole, the film is hilarious and tense in bits.

Mr. Higgins's penchant for mixing visual elegance with coarse gags is equally ill-advised, especially because it makes him work the gags so hard.

Director Colin Higgins plays foul with the audience, constructing some of the most dishonest suspense sequences ever filmed.

Colin Higgins proves himself adept at recreating the style and themes of Hitchcock's films, as well as creating entertaining schemes. [Full Review in Spanish]

Somewhere in the cumbersome comedy thriller Colin Higgins has made of Foul Play, lies the ghost of a good, old-fashioned mystery-comedy-romance.

Goldie Hawn charms her way through this comic Hitchcock homage.

The comedy/thriller plods on for too long with tasteless and witless physical comedy, though it has a few funny moments.

I wasn't expecting big things from this film, but having Goldie Hawn and Chevy Chase starring in this, I had at least expected an easy watching comedy, but it had very little entertainment value.

A funny, quirky, cool comedy with a good cast and an interesting story. I saw this a while ago, but I remember it was really good. I should watch this again sometime.

A very funny homage to Hitchcock.