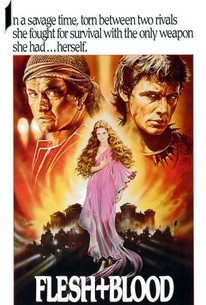 Flesh & Blood (Flesh+Blood) (The Rose and the Sword) Photos

When an attempted political coup in 16th century Northern Italy fails, most of the mercenaries hired by the coup leaders disperse. Not so Martin (Rutger Hauer), who intends to rob his duplicitous former employer Arnolfini (Fernando Hillbeck). Martin is able to raise his own army by using a stolen religious artifact as a talisman. He later kidnaps Arnolfini's prospective daughter-in-law Agnes (Jennifer Jason Leigh), who saves herself from gang rape by feigning eternal devotion to her captor. Weeks of plunder and destruction follow, with a deadly plague thrown into the stew. Flesh and Blood has also been released under the title The Rose and the Sword.

Jaime Segura
as Lord of the Castle

Bettina Brenner
as Lady of the Castle

Siobhan Hayes
as Child of the Castle

A vivid and muscular, if less than fully startling, account of lust, savagery, revenge, betrayal and assorted other dark doings in the Middle Ages.

It's hamstrung by leaden dialogue and the motley international cast - Python and the Grail are never that far away - but it's admirably unsentimental and by no means stupid.

Religion and marriage and the very idea of heroism are hurled into Verhoeven's bestial pyre, his direction has the gift of overabundance -- the Spanish locations and castles teem with putrid lushness.

It's impossible to root for any group or individual, and so the only pleasure we are left with is to enjoy the spectacle of carnage. Nevertheless, in we can leave morality at the castle gate, Flesh + Blood offers a great deal of base satisfaction.

A medieval epic that delivers the titular ingredients in proverbial buckets.

For all its flaws this remains an intriguing early work by a highly capable director that proves you don't need a big budget to tell an epic tale.

Whilst it could have probably done with being a touch shorter, it's an entertaining action adventure.

Flesh+Blood hasn't lost any of its gruesome power.

Ugly drama about the troubles during the dark Middle Ages.

The movie just doesn't live up to the helmer's glorious sense of screen madness, more consumed with establishing ugliness than embracing the potential for a ripping medieval quest.

A more appalling view of the turmoil and misery of the late Middle Ages may never be seen.

Delivers exactly what the title promises (and then some), as Dutch director Verhoeven spares no gory or raunchy details in his vigorous recreation of medieval Europe.

A medieval adventure that does not quite deliver the 80s charm that made a lot of movies from that era such classics. Of course it deliberately chooses to get ugly with rape, torture and flesh wounds, but fails to tell a compelling story. Unlikable characters, forgettable sets and odd alliances make it a bore that is hard to focus on.

Pretty creepy title for a historical film and one that doesn't exactly mean much if you ask me, although there is plenty of both onscreen so...I prefer 'The Rose and the Sword' which was its alternative title for a time. The story is apparently left over script from the Verhoeven directed Dutch TV series 'Floris' so one could almost say its the movie adaptation of that show. Gotta be honest I thought this was a fantasy film as this is the first time I've ever seen it, so yes I got it wrong again. This is actually a historical 15th Century Italian period set...errrm hack n slash film? rescue film?...errrr wait, coup d'état film? black plague film?? oh geez. OK OK its a film which involves a lot of rape and pillage with the onset of the black plague and a bit of a rescue somewhere at the end...kinda. The story revolves around a band of medieval mercs led by Rutger Hauer who were evicted from a city they had just helped siege. The owner of the city, and feudal Lord, promised them looting if they get his city back, but he lied. They get their own back by robbing the rich owner, generally killing his entourage and accidentally taking his sons bride to be. The mercs haul up inside a castle they overthrow and end up defending it from the Lord, his son and their troops. So this being a Verhoeven film I'm sure you're expecting blood and guts...well as I said you get it. Its in no way as violent as other future films from the Dutch director but its most certainly much darker bleaker and more controversial. The main factors in this film which will shock are the out and out rape sequences of the young bride to be Jennifer Jason Leigh. The male members of the merc team take turns raping her in full view I kid you not, a most unsettling thing to watch I must admit. Not only this but the main character played by Hauer also rapes her but to soften the blow she pretends to enjoy it, this eventually leading to feelings for the character. This opens up various quandaries for us the viewers as you don't know who you're suppose to be rooting for anymore. The city Lord is obviously untrustworthy because he betrayed the mercs in the first place. His son is also as ruthless as he is but he shows signs of devotion to Leigh's character, but surely Hauer's character is suppose to be the roguish dashing hero? well I guess not. He's certainly dashing in his elegant period set attire, much style and pomp in abundance with those blue eyes and blonde hair, but he kills, he rapes, he pillages and steals. It is indeed the Lords son and surprisingly the Lords honest respectable Commander that you end up getting behind, although it takes most of the film. Throughout the film there are many slightly unsettling things that take place. One such seen is the birth of a baby to Hauer's character which died in the womb. He merely crams it into a small wooden barrel and they bury it without much thought or ceremony. Its a very harsh scene which is swept aside very quickly just as the characters do in the story. Another is the 'romantic' sequence between Leigh's bride and the Lords son. Only Verhoeven would think to set this kissing scene beneath the dangling rotting bodies of two hanged men. Yeah sure its in the countryside and very picturesque but wow! really? kinda odd. The band of mercs are a truly disgusting bunch, they have little worries and merely go around killing robbing drinking and raping. The band is made up of a few males including Bruno Kirby and Brion James plus a few women too, one of which has her young son alongside her watching it all. I suppose it is based around semi facts, I don't know but I'm sure back in this era many things happened that today would be seen as horrendous. But back then life was cheap, many people were extremely poor, didn't know any better and didn't live very long anyway, not that that's an excuse really but times were very different. This film confused me really, it felt very grotesque in places but almost like a fun swashbuckler in others. The use of modern day profanity didn't seem accurate to me and while the high level of nudity is typically Verhoeven, it does add to the realism but also feels a bit too much at times. Also some of the cast like Kirby didn't quite look right in this era and that big siege tower seemed ridiculous. How on earth did they build something that big and mechanically impressive so fast?!. It all looks great visually and pretty realistic with some nice locations used. At the start Hauer looks badass with his rag bandanna and that sword he wields but alas his character doesn't retain that heroic badassery. Hauer's ragtag team of mercenaries repulse you and in the end you feel they get their comeuppance, including Hauer. The finale is worth the wait but don't expect too much. One thing is for sure, with all the visuals of nudity, plague and chopped up plague ridden dog meat, it will put off eating meat for awhile I reckon. Verhoeven knows how to grab your attention...as if you didn't already know.

Part soft-core medieval porn and part extreme gorefest, this is an early trip into the dirty mind of Paul Verhoeven and it's actually very good. This felt a lot like The Seventh Seal, which I think is the best compliment you can give this movie. Rutger Hauer stars as the unstoppable mercenary Martin, who is immune to the plague and has zero morals. I absolutely love that he never has to really pay for any of his bad deeds. Jennifer Jason Leigh plays an almost equally entertaining character, a two-faced she devil who can't decide which side she's on (for some reason she also walks around naked all the time). This is a largely unseen classic and should be a happy surprise for fans of Robocop and Total Recall.

Flesh & Blood (Flesh+Blood) (The Rose and the Sword) Quotes