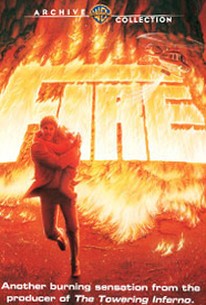 Irwin Allen's follow-up to Flood! is a better effort but still falls short of his big-screen classics. Like its predecessor, Fire! sets up its disaster in a lackluster manner and then fails to build its plot in suspenseful or dramatically compelling ways once the disaster hits. It also leans heavily on soap opera-style dramatic subplots to fill the time between the fire sequences: for instance, the domestic discord between the married couple played by Alex Cord and Patty Duke Astin has an unintentionally campy feel to it. As with Flood!, Earl Bellamy occupies the director's chair and his work is competent but impersonal. However, he improves on Flood! by working in more exciting stunt sequences into the story. Flood! also benefits from a strong cast: Ernest Borgnine turns in a typically professional performance as the everyman hero and old pros like Vera Miles and Neville Brand lend solid support. No one really gets much to do dramatically but they all notch up solid performances. In short, Fire! is no great shakes - even for b-movie fans - but it just might work as a time-killer for viewers in a forgiving mood.

There are no featured reviews for Fire! at this time.