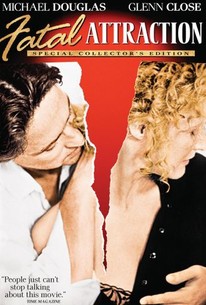 Critics Consensus: A potboiler in the finest sense, Fatal Attraction is a sultry, juicy thriller that's hard to look away from once it gets going.

Critics Consensus: A potboiler in the finest sense, Fatal Attraction is a sultry, juicy thriller that's hard to look away from once it gets going.

Critic Consensus: A potboiler in the finest sense, Fatal Attraction is a sultry, juicy thriller that's hard to look away from once it gets going.

"Fatal attraction" has become a household term for love turned to murderous obsession, thanks to the success of Adrian Lyne's 1987 movie. Dan (Michael Douglas) is a family man whose one-night affair with Alex (Glenn Close) turns into a nightmare when she insists on continuing the relationship, claiming to be carrying his baby. Alex systematically terrorizes Dan, even temporarily kidnapping his daughter, in her attempts to win back his affection. Douglas' besieged family man guiltily tries to preserve his marriage and family from the consequences of his own indiscretion. Close's performance as the love-struck psycho-siren remains her signature role: She conveys the buried feminist message of the film in her challenge to Dan to take responsibility for his sexual behavior. Though many critics acknowlegded the film's striking similarities to Clint Eastwood's 1971 film Play Misty for Me, Fatal Attraction spawned numerous other movies about middle-class families besieged by a lone psychotic intent on infiltrating and destroying the fabric of the family unit, including The Stepfather (1987), Pacific Heights (1990), The Hand That Rocks the Cradle (1992), and Fear (1996). ~ Laura Abraham, Rovi

Under the direction of Adrian Lyne, most of the picture's situations seem like randomly chosen place holders, flat events that just fill time until the final bizarre confrontation.

[The film brings] horror home to a place where the grownup moviegoer actually lives.

The screws are tightened expertly in this suspenseful meller about a flipped-out femme who makes life hell for the married man who scorns her.

While billed as a romance and a thriller, the film strictly qualifies as neither, appealing to our prurience, guilt, hatred, and dread.

A predictable dog's dinner of Pavlovian thriller clichés, this will appeal strongly to those who think women should be kept on a short lead.

Years hence, it will be possible to pinpoint the exact moment that produced Fatal Attraction, Adrian Lyne's new romantic thriller, and the precise circumstances that made it a hit.

Fatal Attraction may remain an influence on the genre but something could be said about the depiction of mental health in the film.

There are so many reasons Fatal Attraction is such a great film but first and foremost is the cast.

...a justifiably iconic '80s release that still holds up relatively all these years later.

Fatal Attraction is a shameless stew of sensationalist effects, destined to give the appearance of a movie to its absolute emptiness. [Full Review in Spanish]

Until it goes berserk in the last reel or so, Fatal Attraction is an absorbing drama of civilized adultery that gets less civilized as it goes on to its inevitable conclusion.

The premise of the movie is a simple extension of Newsweek's statistics. When the alarm on a woman's biological clock goes off, she becomes a demon that will not be denied.

A film of it's time maybe? For Me, it was an obvious thriller that had a predictable ending. Glenn Close has often shown she plays the psycho antagonist very well, and she does a magnificent job as Alex Forest. Close beautifully blends the menacing obsessed bit on the side with the fractured and tormented personality of a woman with mental illness, but I would have liked a bit more from her character development.

Fatal Attraction is a tense, taut and riveting drama thriller that has hints of the horror genre, but only suggests it. Instead, the film leaves you feel vulnerable at every turn, and make you think twice about having a one night stand if you're married. The acting is terrific, with a standout performance by Glen Close as the film's villain. The plot is well constructed, and steadily unfolds to keep you hooked from start to finish. Adrian Lyne's directing is great and he keeps you on the edge of your seat. Glen Close is just insane as Alex Forrest and she definitely makes the film what it is. I thoroughly enjoyed this picture and I thought it had memorable and tense moments. As far as thrillers are concerned, Fatal Attraction remains one of the best films in the genre. Everything about this flick is well done, the plot is intense, the acting is solid and the direction is precise. The film does possess a few limitations, but there's more solid material that weak material on-screen. This is a well executed film that delivers effective thrills throughout and with a phenomenal performance by Glenn Close; it is a film that is not easy to forget. If you're looking for an effective thriller, then give this film a shot. This was an exciting, pulse pounding film that is elevated by great performances, and although it has a simple concept, the acting makes it worthwhile. Fatal Attraction is a film that will make you think twice about committing adultery.

The only thing that ruins this personally is that I just couldn't buy Glenn Close as some hot woman. (Not that Michael Douglas is a catch himself quite honestly, but he had an attractive wife at home, and I couldn't see how he would be tempted by her). I nearly choked at the suggestion that Glenn's character was 36. Hell that's rough looking for 36! Not being horrible, Glenn is a fantastic actress and she plays this role well, but physically all wrong for it. I would have bought someone like (80's) Ellen Barkin here. Once I got over that stretch of the imagination, this was a good movie, great acting from all the cast. Very well done and thought provoking. I have to admit, I found myself pitying both the women more than him (bought it all on himself as far as I am concerned). Glenn's character had some valid points about not going away and being ignored. She did lose me at the bunny boiling, though, cruelty to animals, not on. It did seem to me that all the rage got put onto her and "Michael" pretty much got away with it. (Not saying she wasn't tapped, but she clearly needed help, not a married man messing with her head for his own selfish disposal). I can't imagine why his wife took him back. Yes, they went through some traumatic experiences towards the end - car accident, disappearance of daughter, the bathroom scene - but it seems conveniently forgotten that all these events were caused by his infidelity. How could you trust him ever again?! Good movie, but have to question the mindset of all involved!

A classic thriller that set the standards on the stalker, obsessed ex, woman scorned after revenge genre. Quite raunchy for the time it was made. The tension really mounts as Glenn Close's character goes to increasing desperate measures to keep in touch with and get her man. One scene produced a term of phrase that is still used wildly even today for an obsessed ex.