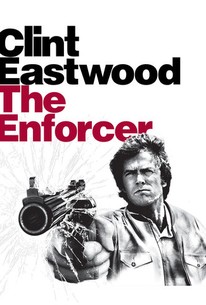 Critics Consensus: Though the slightest hints of series fatigue begin to emerge, The Enforcer delivers riveting action and better humor than its predecessors.

Critic Consensus: Though the slightest hints of series fatigue begin to emerge, The Enforcer delivers riveting action and better humor than its predecessors.

Number Three in the Dirty Harry series, this film equips macho cop Harry Callahan with a female assistant, Kate Moore. Their quarry is a terrorist organization which has kidnapped the mayor of San Francisco. Eventually, Harry and Kate discover that the mayor is being held at Alcatraz Island.

John Crawford
as The Mayor

Joe Bellan
as Freddie the Fainter

Will MacMillian
as Lt. Dobbs

Bill Jelliffe
as Johnny
View All

Critic Reviews for The Enforcer

The Enforcer is the best of the Dirty Harry movies at striking a balance between the action and the humor.

Daly as character Kate is very empathetic and riveting to watch...

Finally, we know Lacey's secret past...she was killed in the line of duty

A series that has become too familiar using the same old formula.

A solid third installment in the DIRTY HARRY series. Tyne Daly excellent as the flustered but competent female partner. Great final showdown with terrorists on Alcatraz.

For Eastwood fans only, third of five in the Dirty Harry series, but hardening of the arteries began to set in with one.

Audience Reviews for The Enforcer

Dirty Harry is back. All in all, the movie held my interest even though you know how a Dirty Harry movie will end.

An explosive, smart, funny and furiously entertaining action-packed thrill-ride that is just too much fun to handle. A great action flick that has lots to offer and is great to watch again. It`s not as dark as the other films and know how to enjoy itself.

Clint Eastwood returns as Inspector "Dirty" Harry Callahan in the third of five films concerning the exploits of this supremely macho cop. This time around Harry is partnered up (much to his chagrin) with a determined, yet inexperienced female partner named Officer Kate Moore, played by Tyne Daly. Their mission: to stop a radical left wing terrorist organization bent on raising Hell throughout San Francisco, The group is primarily modeled after the Symbionese Liberation Army, with perhaps a dash of the Black Panthers thrown in for good measure. This isn't a bad film, as it has some good lines and humor, some decent action, and a little bit of effort to continue the series's trend of making a police drama with socio-cultural/political subtexts. This time around however, the subtext is pretty lacking, and I blame the script, which comes off as not really uninspired, but mainly just lazy. Also, it doesn't help that the idea of having Harry team up with a woman comes off as more novel, and isn't taken as seriously as it should. This results in some lighthearted moments, which aren't bad on a basic level, but end up coming off as a bit silly. So yeah, the film has some problems, but it's still really enjoyable, fairly rousing, and decent enough. The players do their best with the material they're given, and I've got to give Daly some credit for doing her best to hold her own against such an icon playing an equally iconic character. The series has definitely settled into a nice comfortable groove by this point, but even if it is losing a bit of steam, there's still some decent camera work, a fairly fine musical score, and some good action scenes to keep things moving along nicely.

In this third installment of the franchise, Callahan is partnered with a female cop, much to his annoyance. This movie may be considered a little light-hearted in comparison with other Dirty Harry movies,mainly due to the comic tension between Harry and his new partner. (Let me repeat, the term "light-hearted" to be taken only in context with other Harry movies). Beside that tiny pinch of comic relief, everything else pretty much follows the same routine as the previous movies. Eastwood's charisma alone carries the day.