The Eagle Has Landed1976 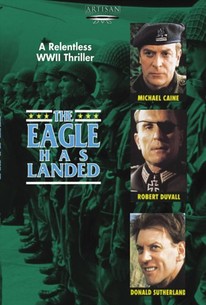 The Eagle Has Landed Photos

John Sturges directed this taut adaptation of Jack Higgins' suspense novel about an attempted kidnapping of Winston Churchill by the German high command during World War II. When it is discovered that in November 1943 Winston Churchill is scheduled to spend a weekend in a country home in Norfolk, the Germans plan to kidnap him. Heinrich Himmler (Donald Pleasence), under orders from Hitler, assigns Nazi colonel Max Radl (Robert Duvall) the chore of sneaking the English-hating Irishman Liam Devlin (Donald Sutherland) into the British countryside and arranging for a 16-man task force to be parachuted into the English country town of Sudley Constable, under the auspices of Colonel Kurt Steiner (Michael Caine). The efficient planning works too well, and before long their exactingly perfect timetable begins to come apart.

Critic Reviews for The Eagle Has Landed

Well, it all sounds like a good idea, but other than Caine's amiable acting and some good photography, this Eagle lays a big egg.

The film is a pretty dismal two hours of waiting for Lefty, who never appears. The Eagle Has Landed simply never takes off.

A big name cast makes up for a few flaws.

Crafted with meticulous precision and infinite patience, the film unfolds like a good novel, with compelling exposition eventually giving way to thrilling action.

An old-fashioned WW II adventure movie directed in a plodding and lethargic way by John Sturges.

Filled with the kind of suprises and reversals which are at the nub of all good suspense stories.

Audience Reviews for The Eagle Has Landed

"The only time this plan makes any sense to me is when I'm drunk" What a waste of time. Ok, so basically the film has an interesting plot. A bunch of nazis on a covert mission to kidnap Winston Churchill, which could have lead to a big victory for Hitler. The film starts very slowly and is a real borefest thru its entire duration. In the middle of the film, the movie reaches its comedic heights when Larry Hagman's character, Colonel Pitts tries to take control of the events. What a character and what a bad performance by Hagman. But he's not the only actor who should've stayed out of the film. Robert Duvall and Donald Sutherland, whom I consider to be good actors, are probably ashamed of their performances in "The Eagle Has Landed". Like in the quote of this review, I'd probably enjoyed this movie more if I had been drunk. Not a major disaster but totally overrated and a fine example of wasted talent.

This war movie gets started on a promising note, but it is sabotaged by a weak, contrived ending.

About as good as something i wished I'd seen for free.

An interesting "What if..." based plot about a german plot to assassinate Churchill is efficiently handled by an action stalwart. The cast is strong, and gives the german would be assassins a rather more understanding and human slant in an unusual and effective WWII thriller.

The Eagle Has Landed Quotes