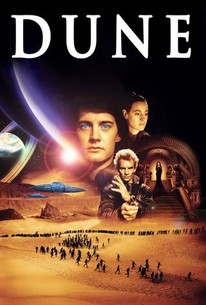 Critics Consensus: This truncated adaptation of Frank Herbert's sci-fi masterwork is too dry to work as grand entertainment, but David Lynch's flair for the surreal gives it some spice.

Critics Consensus: This truncated adaptation of Frank Herbert's sci-fi masterwork is too dry to work as grand entertainment, but David Lynch's flair for the surreal gives it some spice.

Critic Consensus: This truncated adaptation of Frank Herbert's sci-fi masterwork is too dry to work as grand entertainment, but David Lynch's flair for the surreal gives it some spice.

David Lynch wades through dark waters in his adaptation of Frank Herbert's cult science fiction novel. In condensing Herbert's rambling and complex book by eliminating characters and compacting events, Lynch succeeds in rendering the story incomprehensible to those unfamiliar with the novel and making the film look like a sketchy greatest hits collection of the book for Herbert fans. The story takes place in the year 10,191. The universe is governed through a system of feudal rule, presided over by Padishah Emperor Shaddam IV (José Ferrer), who appears to take his marching orders from something that resembles a talking vagina. In the kingdom are two rival houses -- the House of Atreides and the House of Harkonnen. Each house is trying to gain dominion over the universe, but that dominion can only be gained by the house that controls the Spice, a special substance that permits the folding of time. The Spice is only available on the desert world of Arrakis, or Dune. Shaddam, tired of the feuding between the two houses, permits the Atreides to take over the Spice production on Dune, while secretly working with the Harkonnens to launch a sneak attack on the Atreides and destroy them. The leader of the Atreides is Duke Leto (Jürgen Prochnow), who rules with the help of his concubine Jessica (Francesca Annis) and son Paul (Kyle MacLachlan). The rival Harkonnens are headed by the pus-oozing degenerate Baron Vladimir Harkonnen (Kenneth McMillan, in a thoroughly through-the-roof performance) and his two unsavory nephews, Rabban (Paul L. Smith) and Feyd (Sting). When his father is murdered by the Harkonnens, Paul escapes to Dune, where he is greeted by the Fremen (the desert dwellers on Dune who prepare the Spice) as the messiah foretold in Fremen legend. Paul assumes the mantle of messiah and leads the Fremen in a revolt that topples the balance of power in the universe. ~ Paul Brenner, Rovi

Leonardo Cimino
as The Baron's Doctor

Unless you have the book committed to memory, you'll find it practically impossible to follow the story.

As you would expect from visionary director David Lynch, it is a movie of often staggering visual power, the most ambitious science fiction film since "2001"; it's also stupefyingly dull and disorderly.

Most sci-fi movies offer escape, a holiday from homework, but Dune is as difficult as a final exam. You have to cram for it.

The problem is that the imagery isn't rooted in any story impulse, and so its power dissipates quickly.

Dune is a huge, hollow, imaginative and cold sci-fi epic.

Dune is not the masterpiece its adherents have hoped for - but neither is it the disaster its detractors have claimed.

Incarnated by a young and already very compelling Kyle MacLachlan, there is no doubt that when the film focuses on the future Kwisatz Haderach... is when it gains interest. [Full Review in Spanish]

Inside Dune is a good freak show struggling to get out (and failing).

It can be entertaining to watch, to examine like an odd bit of ephemera, but it does not deserve laurels for failing creatively. There are better ways to manage that feat.

There's some pleasure to be had from its misguided spectacle...but only if you embrace the mystery rather than try to define it, which is true, really, of all of Lynch's work. Surrealism isn't meant to be sorcerered into making sense.

It's bad - as bad as they come - but also built to last, and as the years roll on, its fascinating qualities continue to grow.

Underrated, especially for devotees of the book. An impressively faithful if necessarily streamlined adaptation, though heavy on industrial-looking art direction and grotesque makeup effects.

The desert roaming tribe of mystics/warriors called the Fremen (free men?) longingly await the heavenly arrival of their messiah. In the meantime powerful and arrogant otherworldly forces battle for control of a drug that bestows second sight, singularly produced on the same desert planet by a rather huge indigenous life form. The Jesus story then, made into sci-fi, Herbert's novels an veritable earthquake in that community, and wrestled with by David Lynch to bring to the screen. While stylistically vibrant, Lynch is brought low by the inability to transmit the unfolding wonder Herbert delivered: " ... a god walking amongst us!" that is the essence of the story, given by a multitude of intricacies. Lynch tries to follow the story, but only trips in those same intricacies, giving instead plodding pace and mysticism lost.

Ehhhhhh, its a decent sci-fi story. Its no eraserhead though and docent have the grittiness of blue velvet.

A strategically vital mining planet is the subject of a power struggle between duelling Houses that form part of a planet spanning empire in the far future. David Lynch's ambitious stab at bringing Frank Herbert's complex series of novels to the silver screen was something of a heroic failure. Vilified at the time because of its wordy script and erratic fidelity to the source material, Dune is nowhere near as bad as many make it out to be. It has much to commend it; it includes a believable sense of galactic empire, some nice costume design and (for the most part at least) a strong cast all presented with a really nice otherworldly, dreamlike atmosphere. Unfortunately its flaws include poor sets, very dated special effects and some unbelievably hammy performances from the villains of the piece (unsurprisingly, Sting is particularly bad). Add to the fact that some pretty hefty plot points are skimmed over using montage and voice overs and you have a very mixed bag of successes and failures in bringing what (certainly at the time) was probably an unfilmable story. A brave, if flawed attempt that with the right creative team could be ripe for a remake.