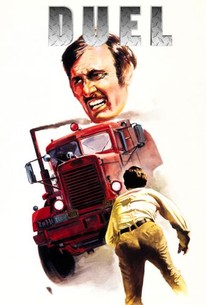 Critics Consensus: Duel makes brilliant use of its simple premise, serving up rock-solid genre thrills while heralding the arrival of a generational talent behind the lens.

Critic Consensus: Duel makes brilliant use of its simple premise, serving up rock-solid genre thrills while heralding the arrival of a generational talent behind the lens.

In this TV movie, Dennis Weaver is driving down a deserted Southern California highway when he passes a large gas trailer truck. Moments later, the truck dangerously tailgates Weaver before abruptly cutting him off. Weaver and the never-seen truckdriver then engage in a motorized duel ... to the death.

Lucille Benson
as Lady at Snakerama

Gene Dynarski
as Man in Cafe

Carey Loftin
as The Truck Driver

Total Recall: I Am Legend and the Work of Richard Matheson
"I Am Legend" — Finally!
Dave McKean & Henson Co. Get "Varjaked"

This simple premise -- a killer truck stalks a driver -- becomes the basis for an exceptionally fraught and well- made suspense film.

This 1971 made-for-TV movie was one of Steven Spielberg's auditions for Jaws, and the same slickly impersonal shock effects prevail.

Simply a rivetingly murderous game of cat and mouse that keeps you on the edge of your seat.

Even without benefit of hindsight, Duel looks like the work of an unusually talented young director.

Once you've seen it, you'll never forget it.

...a surprisingly sturdy first effort for a filmmaker who would (obviously) go onto bigger and better things.

This is among the most flawless pieces of entertainment [Steven Spielberg] ever put his name to.

The film's rusted, growling tanker truck is an obvious predecessor to the man-eating Great White of Jaws. And it's every bit as terrifying.

... 'road rage' taken to new heights of exploitation by the boy wonder.

At 24, Spielberg demonsrated his technical virtuosity with his first made for TV feature, a nail-biting suspenser of a salesman pursued on the roadby a mad trucker.

The film pits the awesome talents of Richard Matheson ... with Spielberg, delivering one of the best genre films of the past 50 years.

The predecessor to the entire truck versus man sub-genre of horror films; of course Steven Spielberg was at the helm of this fairly original concept film. It was the director's first film, the start of a series of films that would culminate in a canon that's lasted for forty years. This first venture had many of the same elements as later films, especially what many consider his magnum opus, "Jaws." The psychological play here rises to an ending climax that pales in comparison to some earlier horror films, and moments in the film still scare forty some years later. The driver is never shown, the situations that he puts the other driver into really scare, and no one seems to be around to help the injured party, which makes for some heart pounding sequences. It's a very simple concept, but with some character development for the part of David (Weaver) who is trying to get back to his wife. Does that have much bearing on the film itself? Not really, because the concept has a driver versus a truck on the open road, with several complications, and that's it. There isn't even all that much dialogue except in the first fifteen minutes. What makes the film watchable, as well as rich in foreshadowing and tension, seems to be the fact that they never seem to leave each other. Even in the moments when there's no chase, when it's quiet and we're waiting for the truck to appear around the bend, it's tempting to scream with anticipation. What also pushes the film past psychological and into the realm of horror is the fact that the truck driver in question randomly seems to choose this victim. It's hellish, the driver and the truck sometimes seeming like the exact same creature, and oftentimes it's hard to distinguish the face-like grill on the front of the truck from a hellhound driver's. Really, the best thing about this early film is that others afterwards weren't as developed and yet had much more story and character than this film, which is simply astounding.

[img]http://images.rottentomatoes.com/images/user/icons/icon14.gif[/img] Back in the day before Steven Spielberg became an enormously acclaimed filmmaker irresponsibly recognized by the Oscars for directing epic, arty, classy dramas, he was unrecognized for his talent in the thriller genre. When he began he directed his incredible debut feature, a little monster of an exploitation movie called "Duel." Although it was filmed on a micro budget and was regarded as a throwaway B movie by the studio that backed it's production, it remains one of the most skilfully crafted television movies ever produced, and to a greater extent it is among Spielberg's greatest films if not the very best of his prestigious cinema legacy. Interestingly ever since it's creation a number of Spielberg's well known films pay homage to Duel through similar uses of camera shots and characters originating from this film, including that of Close Encounters of the Third Kind, and Jaws. Needless to say that it is incredibly tense and endlessly terrifying. It it essentially the perfect demonstration that ambition and imagination is superior to massive CGI creations when it comes to making the most skillful and enjoyable horror films for both genre fanatics and the general popcorn audience. Not only is Dennis Weaver's twitchy, quirky, paranoid performance absolutely terrific, but the direction is absolutely phenomenal for a feature debut. Spielberg get's just about everything in this genre movie correct, it has an opportunist plot, a fantastic lead, endless tension and sets his career up for greater triumphs. It has a marvelous Hitchcock meets "The Twilight Zone" influenced narrative that makes for a great atmosphere enhanced with spellbinding music and sound effects as well as eery voice over work and silent suspense. Duel is basically a darkly haunting benchmark in demonstrating how a finely ambitious small screen director can be instantly transformed into Hollywood's most admired, all due to one influential and timeless hit.

Duel is great, the tension and cinematography was incredible and I loved it.