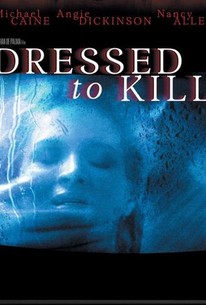 In this stylish, violent thriller,an unhappy wife, Kate Miller (Angie Dickinson), meets a handsome man in a museum and goes to his apartment for a quick sexual encounter. As she leaves, she is brutally murdered. Kate's son, Peter (Keith Gordon) sets out to solve the murder aided by the call-girl Liz (Nancy Allen), who discovered his mother's body and got a glimpse of the murderer, a blond woman. Peter begins watching the office of Kate's psychiatrist, Dr. Elliott (Michael Caine), setting up a camera to record the comings and goings of his patients. When the suspect finally appears, Liz makes an appointment with Elliott in order to get a look at his appointment book. In Dressed to Kill director Brian De Palma deftly incorporates all the tricks and plot devices he learned from observing the masters of the genre, Alfred Hitchcock, Mario Bava and Dario Argento to great effect. The scene where Kate meets her lover in the museum is reminiscent of Vertigo. The murder of Kate in the elevator frightening, bloody and chillingly effective, is similar in tone to the shower scene in Hitchcock'sPsycho. Brian De Palma directs with great visual panache, and gets great performances from his cast, particularly Michael Caine who gives his usual fine performance in a surprising and difficult role. Dressed to Kill is a violent, gory, memorable thriller with many surprises and exciting plot twists.

News & Interviews for Dressed to Kill

On DVD This Week: Homeland Season Four, Age of Adaline, Gotham Season One, And More

View All Dressed to Kill News

Critic Reviews for Dressed to Kill

Dressed To Kill is a nail-biting, seat-squirming, stylish murder mystery with a brain.

Originality has never been a high value in the genre-bound aesthetic of filmmaking, but De Palma cheapens what he steals.

Despite some major structural weaknesses, the cannily manipulated combination of mystery, gore and kinky sex adds up to a slick commercial package.

Ultimately, the film amounts to little more than a consummate study of suspense technique, all dressed up with nowhere to go.

DePalma is not yet an artist of Hitchcock's stature, but he does earn the right to a comparison.

From my point of view, Dressed To Kill is not only a generally pernicious film, it is also a film which presents a serious threat to an already misunderstood minority.

The film has a promising beginning. However, as the story develops, it turns more implausible and superficial... arriving at an ending that adds nothing. [Full Review in Spanish]

Sets a fairly low ceiling for how emotionally engaging it is ever going to become.

A lurid film featuring throat-slashing, overheated lust, and a too-simple reduction of cross-dressing issues for pulpy purposes. But it also uses grand cinematic gestures to relay the dread and guilt of its characters to great effect.

Dressed to Kill remains a prime example of how De Palma is able to marry his awesome technical prowess to the material, using his dazzling feats of cinematic derring-do to propel his stories rather than bury their weaknesses.

Audience Reviews for Dressed to Kill

Is restraint classy in and of itself? Writer/director DePalma's blatant steal from Hitchcock's 'Psycho' has the feel of a film student copying his hero, only without the restraints of his hero's time period, which, it could be argued, lent a modicum of subtlety to the proceedings (even if the conversation was about tawdry sex and murder). DePalma's copy says "damn the torpedoes, full speed ahead, let's get kinky!" You'll have to be the judge as to whether or not this version crosses the boundaries of your decency. What is here is watchable but has the feel of a frat party gone on too long for me, which some may still enjoy. Fans of the Master will guess the killer as soon as he's introduced.

Well executed thriller with horror and drama elements, Dressed to Kill is an engaging film with a good cast of actors and well thought out characters. I felt that the film was expertly directed by Brian De Palma who always seems to make some standout, taught, riveting pictures. Well, that is very much the case. Dressed to Kill is a well made movie, one that boasts an impressive story, which grabs your attention from start to finish. Fans of De Palma's work will surely enjoy this, and if you're looking for a tense, memorable thriller, Dressed to Kill is worth your time. While using a straight to the point approach to the way he tells history, De Palma manages to make a very good film, a film that succeeds at delivering thrills right from the moment it starts. As a thriller, Dressed to Kill is a fine example of one that gets it right, it steadily unfold before your eyes, an unravels its plot in a way that keeps you interested and add to that a great cast, and you have a film that is quite memorable in the long run. De Palma's work, I find is quite unique, and his style is mesmerizing and he has brought something quite worthwhile in the cinema. Dressed to Kill is among his best films, a well acted film that boasts some thrilling moments. The film is a genre classic, one that is a well crafted thriller and even with its weaker moments, still has enough good elements to make this a highly entertaining film.

For a director regarded as highbrow and artfully mainstream, Brian DePalma can certainly tap into the sleazy turpitude of human nature. The grabber is Angie Dickinson's full-frontal nudity in a shower which is shown in high-key, erotic lighting (although the body double belongs to Penthouse Pet Victoria Lynn Johnson). 'Dressed to Kill' is a decadent treat for fans of giallo horror (the killer-with-the-black-gloves cliché is intact). DePalma's craftsmanship is undeniable in tracking shots such as one spectacular example in a museum gallery where we follow Dickinson as she is stalked by an incognito man with her glove. A leaflet indicating that the one-night stand has a sexually transmitted disease is another harbinger of DePalma's perverse sensibilities. On the prerequisite "dark and stormy night", DePalma manipulates his erstwhile wife, Nancy Allen, into carnal bait for the unhinged serial killer and the tightrope anticipation nearly singes the screen into ashes. The transvestite twist in the denouement has been lambasted as a cheat (due to a series of taunting answering machine messages) but I found it to be delightfully loopy and a glowing tribute to the absurdist tendencies of DePalma's mentor, Alfred Hitchcock. A dream sequence somewhat disengages the enterprise, but overall, 'Dressed to Kill' is a kamikaze tour-de-force of kitchen-sink melodrama alongside slasher mainstays.

This steamy erotic thriller represent Brian De Palma's lurid homage to Hitchcock's Psycho...and it's quite a film! Psychologist Dr. Robert Elliott finds his world totally flipped upside down when a patient of his, a sexually frustrated housewife named Kate Miller, is brutally slaughtered by another one of his patients- an unhinged transgender individual named Bobbi. On top of that, a witness to the murder- a young prostitute named Liz has become Bobbi's next target. Liz isn't helpless though, as she finds comfort in the arms of Kate's revenge-driven teenage son Peter who is bound and determined to bring Bobbi to justice. While the film references/homages plenty of movies (many of them Hitchcock's), Psycho is the main one. What I love about all this is how this puts its own spin on things, and creates a great work of art that functions as both homage and a stand alone thriller. The film's content and subject matter really drew a lot of criticism from the LGBT and feminist communities, but, regardless of where one stands on the issue, it is undeniable that this film succeeds in being provocative. It is also one of De Palma's best, featuring some outstanding cinematography/camera work, and some great music from frequent collaborator Pino Donaggio. There's a wonderful sense of mood, tone, atmosphere, and dread, and it amazed me just how riveting and suspense this gets sometimes. Michael Caine is good as Elliott, Nancy Allen is strong as Liz, and Angie Dickinson is quite something as Kate. I also enjoyed seeing Dennis Franz as a slimy detective. The effects are terrific, and the film really delivers the goods when it comes to sex and violence. But thankfully the film is also actually about something, and not just a visceral thrill ride. There are some great sequences here, but my favorite has to be the museum sequence. It's stunning. Definitely give this one a watch, because it's great.