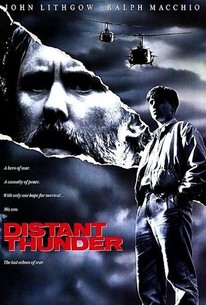 Discharged from Vietnam, John Lithgow and his army buddies have trouble fitting into a hostile home-front society. Rather than endure dirty looks and taunts of "baby killer," Lithgow and his friends wander aimlessly all through the Pacific Northwest. Several years pass, during which time Lithgow's estranged son Ralph Maccio grows to manhood. Finally emerging from his self-imposed exile, Lithgow begins searching for the son he's never known.

Allan Lysell
as Buddy
View All

This is a movie of great subtlety and strength, marred by the mechanical way in which the last act is played.

It's hard to fault a story so poignant and still so relevant. But this tale of lost souls deserved exactly the right setting, one that could have provided the intimacy needed to illustrate a sad, yet hopeful, message.

Cliched film about Post Traumatic Stress Disorder, but with surprisingly strong performances by Lithgow and Macchio.

There are no featured audience reviews yet. Click the link below to see what others say about Distant Thunder!