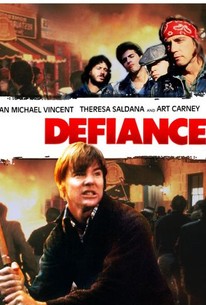 Although it is far from a perfectly contrived drama, Defiance has its moments of high emotions and rising fear. Tommy (Jan Michael Vincent) takes up temporary housing in a New York neighborhood plagued by a violent gang, the Souls. Tommy is waiting for his next assignment as a seaman and though he tries to avoid the gang and his neighbors, it does not work. Soon he is single-handedly battling the Souls and not only changing their attitudes, but the attitudes of his previously intimidated neighbors as well. They quickly back him up as the one person who can make the neighborhood safe again. ~ Eleanor Mannikka, Rovi

As a WWII story, it's inspiring, and even new. As a film, it's tense and nerve-wracking and sobering. It's a simple, solid movie, worth seeing indeed, but I fear more like a satisfying Chinese dinner over time. See it before the world forgets about it.

If only it were to have an organic, sensitive screenplay that paid closer attention to its characters and focused more on their thoughts and feelings throughout their intense experiences, Defiance would have been a much more powerful and engrossing film.

There are no featured audience reviews yet. Click the link below to see what others say about Defiance!