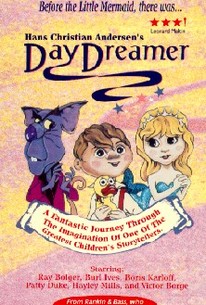 Four stories from Hans Christian Andersen appear in The Daydreamer, a feature using the Animagic process that uses live action combined with stop-motion puppets. Included are "The Little Mermaid," "The Emperor's New Clothes," "Thumbelina," and "The Garden Of Paradise." Songs and dances compliment an international all-star cast of voices used for the characters. Ray Bolger, Margaret Hamilton, Burl Ives, Hayley Mills, Boris Karloff, Cyril Ritchard, Patty Duke, Terry-Thomas and Victor Borge join Ed Wynn in his second-to-last screen role. This was the last film in which fans would hear the voices of Sessue Hayakawa and Tallulah Bankhead. Director Jules Bass provided the lyrics, with Murray Law providing the music for this entertaining children's fantasy.

Cyril Ritchard
as The Sandman

Hayley Mills
as The Little Mermaid

Boris Karloff
as The Rat

Ray Bolger
as The Pieman

Tallulah Bankhead
as The Sea Witch

Victor Borge
as The Second Tailor

Terry-Thomas
as The First Tailor

Ed Wynn
as The Emperor

Sessue Hayakawa
as The Mole

Robert Goulet
as The Singer
View All

Critic Reviews for The Daydreamer

There are no critic reviews yet for The Daydreamer. Keep checking Rotten Tomatoes for updates!

Audience Reviews for The Daydreamer

There are no featured audience reviews yet. Click the link below to see what others say about The Daydreamer!