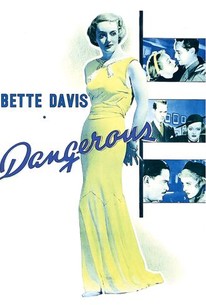 Not even considered a good film back in 1935, Dangerous is held together by the mesmerizing performance of Bette Davis. The star is cast as alcoholic, self-destructive stage actress Joyce Heath, a character obviously based on Jeanne Eagels. Wealthy architect Don Bellows (Franchot Tone) becomes convinced that Joyce can be rehabilitated with the "right" stage vehicle, and begins pulling strings to bring her back to the footlights. She rises to the occasion, falling in love with Don in the process. But Joyce becomes convinced that she's a jinx to any man who gets near her, as proven by her spineless, dissolute husband, Gordon Heath (John Eldredge), who refuses to give her a divorce. Deliberately hurting Don's feelings so he will escape her "curse," Joyce determines to rid the world of both herself and her husband. But things don't work out that way, and as a result Joyce is left in an inextricable Ethan Frome-like dilemma at film's end, while Don finds happiness with his socialite Gail Armitage (Margaret Lindsay). It is generally conceded that Bette Davis won her Academy Award for Dangerous because she was denied the Oscar for her performance in the previous season's Of Human Bondage. Dangerous was remade (and considerably reshaped) in 1941 as Singapore Woman.

William B. Davidson
as Reed Walsh

Edward Keane
as Doctor
View All

The actress part gives Bette Davis every opportunity to do her drunken haridan, and she does her to the hilt. An enjoyable, though crude stunt.

Dangerous, then, is unusual, but only because of Miss Davis.

I know that Bette Davis is a classic actress that a lot of people love. This is the earliest movie of her's that I've seen. I really have not been impressed by her much though.

Not the best Bette, Oscar notwithstanding, but still enjoyable.

Dangerous is a very good Bette Davis film. Bette won her 1st Oscar as Best Actress for her role in this film in 1935. Bette plays a down on her luck actress whom has already seen her career at it's heights. A carrer now vanished due to her recklessness and all the horrible things that happened to her. She meets a wonderful architect that is just meeting his stardom played by the very talented Frenchot Tone. If you a fan of Bette Davis or like a good classis drama you will enjoy this film.