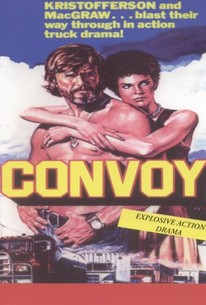 The CB (citizen's band) radio fad had nearly run its course when this feel-good action film was made by director Sam Peckinpah. In the story, based on C.W. McCall's song "Convoy", a group of struggling truckers (who stay in touch by CB) run into a situation which ignites their indignation. They arrange to form a truck convoy under the leadership of the man whose CB nickname is "Rubber Duck" (Kris Kristofferson). He is the most aggrieved of the bunch, having been harassed beyond the point of endurance by Lyle Wallace (Ernest Borgnine) a blackmailing traffic cop who pursues him ever more frantically through several states after he fails to submit to the phony speed trap he had set up. As news of the truck convoy spreads, unexpected allies join the line, and the now-gigantic illegal protest becomes the subject of national news reports.

There's a whole lot of nothing going on here.

A large dose of the best kind of escapist good humour.

A bad joke that backfires on the director.

There is the ghost of something here and if the film had had the courage of its convictions, it might have been something else, but as it stands now, it is simply an action movie but a pretty fair one.

The movie's development is confusing and lacks concrete ideas. [Full Review in Spanish]

A noisy but enjoyable destruction derby of a film.

A road movie of the yee-haw variety, it makes the more enjoyable Smokey and the Bandit look positively Shakespearean in comparison and even allows the dim-witted The Cannonball Run to appear as mature and masterful as The Grapes of Wrath.

It might be worth seeing how the acclaimed auteur who made The Wild Bunch could also make the dreadful Convoy.

Convoy continues Peckinpah's voyage into "nihilist poetry," in the phrase of Pauline Kael...

Unmotivated story riddled with confusion and disarray. Production staff does the job with little imagination.

Bloody awful! The only Peckinpah movie I would never watch again. If you're going to base a movie on a song, at least pick a decent fucking song!!! Makes Smokey and the Bandit look like Citizen Kane.

Truckers, led by Kris Kristofferson, go on a tri-state protest over police brutality, high gas prices, and other complaints. An uneven script and just fair acting mar this picture.

Great Truck-Driving movie from the 70's with a great theme song. Without the song, it would be a very bad movie. The movie didn't have enough of the song at each plot development. It gets bogged down near the end with politics. The characters are fun but not very memorable; I didn't quite support their cause. This movie would appeal to the guys-who-love-movies crowd. The end sequence on the bridge with the police blockade was suspenseful.