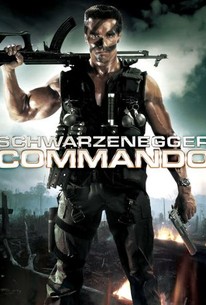 Colonel Matrix (Arnold Schwarzenegger) is retired and living peaceably with his 10-year-old daughter (Alyssa Milano) when she is kidnapped by the henchmen of an exiled Latin American dictator. The dictator's plan is to reinstate himself in power by eliminating the president of his country, using Matrix to kill him (or he will kill the kidnapped daughter). Matrix escapes from the plane that is supposed to be carrying him to his mission and then proceeds to go from one violent confrontation to the next as he hunts down the dictator and moves to rescue his daughter. Helping him is Cindy (Rae Dawn Chong), who has her own reasons for wanting the dictator dead. ~ Eleanor Mannikka, Rovi

Phil Adams
as Officer in Galleria

Ava Cadell
as Girl in Bed

Mikul Robins
as Boy in Bed

Comic book stuff, helped out by the presence of Rae Dawn Chong as an airline stewardess whose sarcastic commentary adds some comic counterpoint to the deliberately overscaled action.

Chong lights up the film like a firefly, Schwarzenegger delivers a certain light touch of his own, [and] the result is palatable action comics.

Commando was Arnold's baby, his vehicle for bringing his unique brand of action-insanity to willing masses.

An over-the-top, cartoony, and brilliantly stupid action movie, which can be enjoyed because of its flaws, not despite them. [Full review in Spanish]

It might have been fun to watch when I was nine, but knowing what I know now, it is a horribly offensive film.

An audacious comic-book movie on steroids...cinematic junk food, but even a dieter deserves to cheat once in a while. [Blu-Ray]

serves as a template for many future action flicks

At first glance, this is just an ordinary action film where the main guy has to save his daughter from her kidnappers. There is more going on in this story if you really listen and pay attention. It's a great story, and it's paired with a ton of great action sequences. This is one of Schwarzenegger's best films ever, yet I don't see a lot of conversation on it. A great action thriller with the best action star ever, what more could you ask for? I loved this movie, and I recommend it.

Matrix: You're a funny guy Sully, I like you. That's why I'm going to kill you last.  "If there's a mission that no man could survive... then he's the man for the job." Commando is exactly what you would expect. It is a fun, action packed thrill ride with the greatest action star ever, Arnold Schwarzenegger. It isn't a top shelf action film like some of his other works(The Terminator, True Lies). But for fans of his high body count, non-stop, full throttle, one liner heavy films, it is a joy to watch. The last twenty minutes makes up some of the most ridiculous kills you'll ever see as Schwarzenegger mows threw a whole fucking army by himself. Try to keep a body count at the end of this movie. I don't think you can without pausing. A one time soldier is now content living a peaceful life with his daughter in the mountains. One day an old Army buddy shows up telling him to expect someone to try to kill him, as a lot of people from his old outfit are being killed. As soon as the guy leaves, the people he was talking about show up and abduct Matrix's daughter. One of the men in charge also used to be in Matrix's outfit. Matrix is told to assassinate a foreign president and is put on a plane to do just that. But it's a Schwarzenegger character so you know he isn't gonna do what he is told. I liked Commando for what it was. Schwarzenegger always has a great presence onscreen. He is funny and exciting to watch, and this is just another example of what makes him the best action star to ever beat the shit out of some bad guys, say a one-liner, and walk away at the end.

Considering that Arnold Schwarzenegger starred in some of the most memorable and best action films to ever thrill an audience, Commando is a decent film, but compared to other films he's done; this one is pretty forgettable. The film is a decent action film that is quite cheesy, so if you're looking for a cheesy action film, look no further than Commando. The action is good, but the story lacks and could have been better. Don't get me wrong, I love cheesy action films, and I did like Commando, however I just feel like it missed something to really make it another Schwarzenegger classic. As far as his other films are concerned, Commando doesn't really demand multiple viewings, but it's still a decent action film to watch. The film is a must see for Schwarzenegger fans and though it's not as strong as his other films, this is still a fun film to watch. Commando has some memorable quotes and pretty good action scenes. Though the film could have been better, and there's plenty of room for improvement, Commando has enough thrills despite it being a bit disappointing. The plot could have been much better, and it's what's had be thrown off a bit for really enjoying the film. I did like it, but let's face it, this isn't Terminator or Predator. Commando is a fun, silly decent actioner that though is flawed is still entertaining, and amusing.