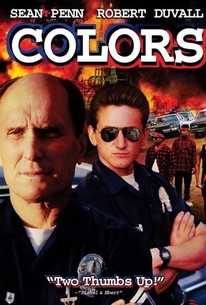 Colors stars Robert Duvall and Sean Penn as partners on the LAPD's gang crime division. Duvall had hoped to spend more time with his family, but he's pulled back into active service because of a step-up in gang activity. He makes no secret of his contempt for his novice partner Penn, but eventually comes to rely on the younger man as a valuable street contact. The central crisis is the battle for supremacy between the "Crips" and the "Bloods", with every effort to call a truce stymied by the gang members themselves and by undue police intervention.

Ron Boyd
as Cop at Sharon's

Roy A. Nunez
as CRASH Officer

Paula Bellamy
as Woman #1 at Recreation Center
View All

Colors is a solidly crafted depiction of some current big-city horrors and succeeds largely because of the Robert Duvall-Sean Penn teaming as frontline cops. They're terrific together as members of the gang crime division of the LAPD.

Never as eccentric as The Last Movie or Out of the Blue, Colors nevertheless makes most other cop movies look formulary by comparison.

Though its story has the makings of standard stuff, and is sometimes sketchily told, nothing about 'Colors is ordinary.

It's an exhilarating sparring match between Duvall's workmanlike fine-tuning and Penn's raw energy.

There's great pleasure in watching these two actors work. And Hopper, a great actor himself, knows what they need to thrive.

Colors is a special movie -- not just a police thriller, but a movie that has researched gangs and given some thought to what it wants to say about them.

To enjoy the movie, it is best to assume the director's mature point of view, who knows how to organize the distance that the camera must maintain before the action. [Full Review in Spanish]

Colors is - almost incidentally a riveting and skilful piece of work, but it is made with an integrity and seriousness of purpose which will be confusing to some of the audiences it may attract.

Sean Penn and Robert Duvall play a mismatched team of cops on a special anti-gang task force on the Los Angeles Police Department. Their characters' growth makes this movie much more than a sensational look at street gangs, which it most certainly is.

While Colors' down-to-earth, dual portrayal of police work and criminal dealings has since been outdone by The Wire and the entertainment it consequently inspired, there's no doubt fans of any of those shows will be more than satisfied by this film.

Penn and Duvall are two of our greatest actors, but here they're posturing rather than performing, aware that they're in an Important Film.

Colors has a tentative, ambivalent feel to it--as if Hopper merely considered himself a hired gun who should avoid imposing too personal a vision on the material.

Good cop film, nothing special about the film if you watch it now, back then it had more of an impact. Good acting and screenplay.

A film with issues, still very relevant today, yet dated by the music and clothing. I particularly like the relationship between Penn and Duval, a great rookie film.

A explosive, shocking, unsettling and heart-pounding drama. Thrilling, frequently exciting and all the way exhilerating. Gritty and realistic. Robert Duvall and Sean Penn are excellent. Their performances are truly brilliant and satisfying.

Oldshool...This is what started that Gangster Gangster ^_^